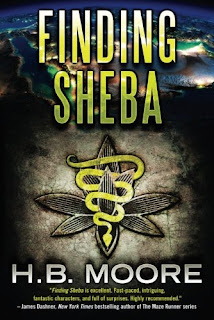 For centuries, historians have speculated that the Queen of Sheba is nothing more than a seductive legend; but when undercover agent Omar Zagouri finds a tomb in a tunnel beneath Jerusalem, he unearths cryptic clues that may lead to the queen’s final resting place.

This discovery, if authentic, could throw into question the governmental claim to the Holy Land—and prove the Bible false. Wealthy collectors, ruthless archaeologists, and officials from Egypt, Ethiopia, Israel, and Yemen scramble to find and lay claim to the secret site.

Dr. Richard Lyon of Brown University, the world’s leading expert on the queen, is found murdered in his office, setting off a chain of deadly events. Omar desperately works to piece together the puzzle to locate the queen’s burial ground, fearing another assassination will take place. He teams up with one of Lyon’s protégées as well as with his ex-girlfriend, agent Mia Golding, in order to unravel the truth about the queen, expose a murderer, and reveal a timeless story of love, revenge, and sacrifice.
What did I think?


I do have a keen interest in ancient history, particularly Egyptian and Roman, so I always like to read fiction books involving archaeology and hidden treasures.  Finding Sheba definitely fell into that category and H.B. Moore cleverly added a thriller element to it which made it a very quick read as I absolutely raced through the pages.


There are three interconnected stories in the book as all of the characters pair up: Nicaula & Batal, Omar & Mia and Jade & Lucas. Sometimes the balance between historical and romantic fiction felt like it was tending more towards the romance side, but then something unexpected would happen to move the scales towards historical fiction and even thriller.  So all in all, Finding Sheba is quite a mix of genre that works very well.

Nicaula, the Queen of Sheba, and Batal was always going to be my favourite story.  Nicaula is the queen and is destined to marry King Solomon but her heart lies elsewhere, with Batal, a lowly soldier.  Their story unfolds as the other characters look for her tomb which will confirm the very existence of the Queen of Sheba.

Omar and Mia are ex-lovers but have to work together, following secret orders in the quest for the safe preservation of antiquities.  Mia reminded me of Lara Croft as she can certainly stand up to the men and give them a run for their money.  Omar is clearly still in love with her, but how does Mia really feel?  Mia is hiding some secrets of her own and I had an awful feeling she was using Omar because of his feelings towards her.  I was never sure which side she was really on, which just goes to show the talented suspenseful writing style of H.B. Moore.

Jade is thrust into the mix after her professor, Dr. Lyon, was killed and she had already accepted an internship in Cairo to research her thesis on the Queen of Sheba.  She is paired with Lucas, an attractive French egyptologist who naturally sets her pulse racing.  Lucas is a bit of a mystery and, just like with Mia, I sometimes wondered who he was really working for.

There are some really interesting thoughts on the Queen of Sheba and King Solomon - with neither of their existences having been proven.  Finding Sheba certainly gives food for thought as the effect of proving their non-existence would be felt around the world.   For me, there was a bit too much of the romance side of things as everyone paired off; thankfully there's enough of an espionage kind of feel to the book to help me overlook the racing pulses of attraction.  Of course, I loved the archaeological passages in the book; stumbling across tombs and trying to decipher the poem in the letter Omar received from his grandmother.  The anticipation of a major archaeological find gave me goosebumps throughout and I had to keep reminding myself that it wasn't real.


So, whether you believe that the Queen of Sheba existed or not, this is a fascinating fictional read spanning millennia.  I felt like I was transported to ancient times in one moment then thrust into the cut-throat battle for antiquities the next.  I'm really pleased to see that there is another Omar Zagouri book; Omar is a great character and I will certainly be adding the next book to my reading list.

I received this e-book from Booklover Catlady Publicity in exchange for an honest review.