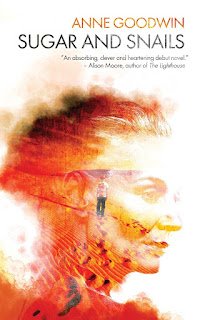 The past lingers on, etched beneath our skin ...


At fifteen, Diana Dodsworth took the opportunity to radically alter the trajectory of her life, and escape the constraints of her small-town existence. Thirty years on, she can’t help scratching at her teenage decision like a scabbed wound.

To safeguard her secret, she’s kept other people at a distance... until Simon Jenkins sweeps in on a cloud of promise and possibility. But his work is taking him to Cairo, and he expects Di to fly out for a visit. She daren’t return to the city that changed her life; nor can she tell Simon the reason why.

Sugar and Snails takes the reader on a poignant journey from Diana’s misfit childhood, through tortured adolescence to a triumphant mid-life coming-of-age that challenges preconceptions about bridging the gap between who we are and who we feel we ought to be.


I do love to read books based in the North East; I get that little skip of pride in my belly seeing places I've been and streets I've walked down in print.  I also visited Cairo many years ago which created my love for Egyptology, so I was getting a double whammy in this book.  Unfortunately for me, Cairo doesn't feature greatly, as it is about the event that happened there in Diana's past rather than the city.  Location aside, Sugar and Snails is such an exceptional and unique book that deals with some difficult subjects in a sensitive and honest manner.  Anne Goodwin has created a character in Diana that you instantly care about because of her insecurity, but Diana is stronger than she thinks and the reader has the honour of joining her on a journey that sees her fear peeling away like the layers of an onion.

Diana Dodsworth is a junior lecturer at a university and, with a select group of only a few friends, it is clear that she likes to keep herself to herself.  One night at a dinner party she meets Simon and it is clear that there is an attraction there but there's something holding Diana back.  Despite Diana constantly pushing him away, Simon is undeterred and their relationship grows.  When Simon is offered a position in Cairo he wants Diana to come out to visit him but Cairo holds painful memories for her and she is loathe to apply for a passport to join him.  As Diana's past is revealed, it becomes apparent why she doesn't want to travel to Cairo and I felt such terrible anguish for her.  Will their relationship survive the distance?

This was such a heart-rending story and it is very difficult to review without spoilers.  Suffice to say my heart was breaking at the pain Diana has endured in her life.  From parents who didn't understand her, and even took her on a trip to Lourdes to cure her, to confusing teenage years when every teenager just tries to find out who they are.  Some passages are difficult to read and I had a clenching tummy on more than one occasion, but my discomfort was quickly surpassed by my feelings for Diana's wellbeing.  Diana feels so alone and scared but when she overcomes her fear she finds out that true friendship is more than skin deep.

So hopeful and heart-rending, Sugar and Snails is an amazingly brutal and honest story about one person searching for their place in life.  Diana is perhaps more honest than most people can ever hope to be and I applauded her bravery throughout the book.  Sugar and Snails is emotional and intelligent and well worth 5 stars from me.

I received this e-book from the author in exchange for an honest review.