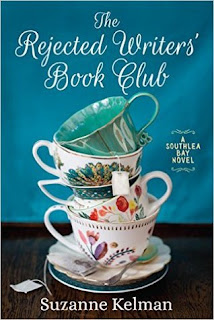 Librarian Janet Johnson is puzzled when she is invited—and practically dragged—to her first meeting of the Rejected Writers’ Book Club. This quirky group of women would much rather celebrate one another’s rejected manuscripts over cups of tea and slices of lemon cake than actually publish a book. But good friends are exactly what Janet needs after moving to the small town of Southlea Bay, Washington. Just as the ladies are about to raise a teacup to their five hundredth rejection letter, they receive bad news that could destroy one member’s reputation—and disband the group forever. To save the club, Janet joins her fellow writers on a wild road trip to San Francisco in search of the local publisher who holds the key to a long-buried secret. As they race to the finish line, they’ll face their fears—landslides, haunted houses, handsome strangers, ungrateful children—and have the time of their lives.


I had seen some excited tweets about this book and, as a self-confessed chain tea drinker, how could I resist a cover with such fabulous teacups on it?  It's a book club with a difference; every member has written a book and received a rejection letter which is just cause for a get together and celebration.  Then disaster strikes...one of the ladies receives an offer from a publisher!

Janet works in the local library and, after receiving a call from her 'ice child' daughter in distress, decides to visit her daughter in California.  Janet is afraid of flying so she is planning to drive from Washington to California.  This links in nicely with the book club ladies as they need to go to San Francisco to convince the publisher to reverse the offer letter, and as Janet is going anyway they invite themselves along.  As the ladies go off on a road trip, Janet leaves her husband to hilariously cope with the raccoons that visit their garden at night to play dustbin piñata.

The Rejected Writers' Book Club is a fun read that reminded me of the Golden Girls as the ladies get into so many hilarious scrapes as they attempt to recover the manuscript.  I also really enjoyed the relationship between Janet and her daughter; seeing it develop over the course of the book into something a little less strained.  I read this whole book with a smile on my face; although there were some worrying moments I knew there would be a smile right around the corner.

I do hope Suzanne Kelman allows us to visit Southlea Bay again soon.  I'll certainly be in the queue to read the next book.

I received this e-book from the publisher, Lake Union Publishing, via NetGalley in exchange for an honest review.