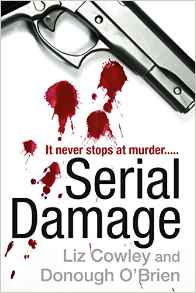 A merciless killer with no apparent motive.

A series of murders with no discernible pattern.

How can he be stopped?

In disconnected locations all over the world a killer plies his terrible trade, seemingly selecting victims at random and killing without remorse. The crimes are the result of one man's obsessive mind, a man warped by a litany of slights and disappointments since childhood for which he seeks methodical and terrible revenge. Because of the geographical spread of his chilling, 'motiveless' murders, they might normally be impossible to solve, but inexperienced and ambitious police psychologist Alice Diamond may unwittingly hold the dramatic key to his capture…

A riveting thriller in the best traditions of Barbara Vine, Patricia Highsmith and Val McDermid, Serial Damage will keep you gripped to the very last page.


I am a big fan of both Urbane Publications and heart-pounding thrillers so when I saw Serial Damage in Urbane's catalogue I knew it was one that I just had to read.  I was also intrigued by it having been written by two authors, husband and wife Liz Cowley and Donough O'Brien.  Are two brains better than one or should writing always be done solo?

I was completely riveted from the first chapter when the peace and tranquillity of Cornwall was shattered as 84 year old Helen Mitchell was shot and killed whilst pruning her roses in her own front garden.  The killer had one regret: that he didn't tell Helen who he was. The reader is then given a flashback to the 70's where an art teacher is writing a letter to a 7 year old's foster parents after seeing his disturbing drawings.  It's clear from then on that this is a revenge story but I would have liked a few more flashbacks to fully get into the mind of the killer and to perhaps explain a bit more why he chose his victims.

As the killer goes on a rampage of revenge across the world, we are introduced to Helen's god-daughter and psychologist, Alice Diamond.  Alice becomes the main character as we follow her personal life where she meets and dates two men: safe John and dangerous David.  There was a definite air of menace around Alice's relationships as I wondered whether John was as safe and David as dangerous as they appeared to be.  Alice gets involved with the police in trying to track down the serial killer and as the pieces start to fit together in her mind and the net closes in she doesn't realise that she might be next on his list.

Although I enjoyed Serial Damage, I felt that each murder was over too quickly.  There was good build up to each one as we were introduced to the characters, then the murder happens but, before you could process it, the authors have already raced on to the next victim.  If I counted correctly, there were ten murders and you know they are linked but there's not enough information there to gather clues.  After each victim I raced on to the next one and quickly forgot about the predecessors.  When one comes back to haunt the killer it was a murder I had completely forgotten about, so I had to flick back through the pages to remind myself, slightly spoiling the effect of the ending.

Aside from rushing past the murders, the pacing is good and Alice's story became more of a hook than the killer's for me.  I think that with only one author there might not have been so many characters, some of them being lost in the dense fog of my brain.  Fewer victims and more depth of character would have made this a superb book, but I still enjoyed it so it's a solid 4 out of 5 stars from me.