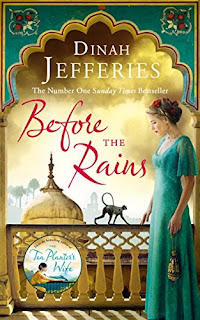 A romantic, heart-wrenching tale of love against the odds from the Number One Sunday Times bestselling author
1930, Rajputana, India. Since her husband's death, 28-year-old photojournalist Eliza's only companion has been her camera. When the British Government send her to an Indian princely state to photograph the royal family, she's determined to make a name for herself.
But when Eliza arrives at the palace she meets Jay, the Prince's handsome, brooding brother. While Eliza awakens Jay to the poverty of his people, he awakens her to the injustices of British rule. Soon Jay and Eliza find they have more in common than they think. But their families - and society - think otherwise. Eventually they will have to make a choice between doing what's expected, or following their hearts. . .


This is the second Dinah Jefferies book that I have read and on both occasions have been swept away to the beautiful locations described in the book.  Before the Rains, like the Tea Planter's Wife, is absolutely oozing with colour, sounds and smells of exotic imperial India.  You often hear people say that 'I closed my eyes and I was there' but with Dinah Jefferies my eyes were wide open as she took me on a journey to 1930's India.


The book starts with a tragedy for Eliza as she leans over the balcony to catch a glimpse of her father in a procession into the city of Delhi.  As he comes into view, Eliza gets her final glimpse of her father as she witnesses his death.  Eighteen years later, Eliza returns to India as a photographer on assignment to photograph the royal family of Juraipore.  Eliza doesn't want to get staged shots of the family in stiff poses, but rather wants to capture the natural flow of life in the castle.  Eliza soon becomes friendly with the mysterious and alluring second son, Prince Jay, as he attempts to create an irrigation system before the rains come.

Eliza has a secret that she tries to keep from the royal family - she is a widow.  As with all secrets, this secret gets out quite quickly as the walls in this castle really do have ears.  In England nobody would bat an eyelid at this but in India, where women are tasked with ensuring the health of their husband, Eliza is seen as unlucky and must be chaperoned at all times.  As Eliza inevitably grows closer to Jay, their relationship has the potential to create a royal scandal - you can almost see the headlines: The Prince and The Widow.  In the end, will Jay chose love or duty?  With many people trying to put a stop to their relationship, do they even stand a chance?

Before the Rains is another fabulous saga from Dinah Jefferies.  It is filled with secrets, intrigue, skulduggery and romance.  Eliza is an amazing trouser-wearing heroine, pushing the boundaries of what was expected of women in that era.  She is such a strong and vibrant character that she breathed life into every page.  A colourful, vibrant epic that I highly recommend. 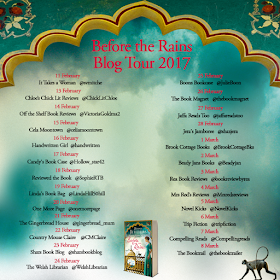