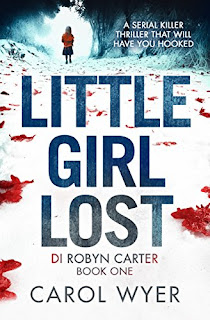 Her breath rose and fell in fearful gasps but it was too late. She could already see what she dreaded most. The back seat was empty.


Her little girl was gone.

Abigail lives the perfect life with her doting husband and adorable baby Izzy. But someone knows a secret about Abigail and they want the truth to be told.

When Izzy is snatched from a carpark, it becomes a case for Detective Robyn Carter.  Someone has been sending threatening messages to Abigail from an anoynmous number.  What is Abigail hiding?

Robyn’s instincts tell her there’s a connection between Izzy’s abduction and two murders she is investigating. But the last time she acted on impulse her fiancé was killed. To break this case and earn her place back on the force, she must learn to trust herself again – and fast. Robyn is on the hunt for a ruthless serial killer. And unless she gets to the twisted individual in time a little girl will die ….


What a brave move from Carol Wyer to make the transition from writing funny, lighthearted books such as the fabulous Life Swap to something so intensely dark and disturbing in Little Girl Lost.  A move which completely paid off, I might add.  I found Little Girl Lost quite uncomfortable to start with as there are some disturbing opening scenes but real life is unfortunately filled with such darkness.

There are a lot of characters at the start and I found it slightly confusing, but out came my trusty notebook to jot down all the relevant names.  In a 'before' setting we are introduced to Alice who's about to become the stepdaughter of actor Paul Matthews.  Paul has two children of his own: sick and twisted Lucas and goth-girl Natasha.  Alice still hears the voice of her dead father speaking to her through her toy bunny and when something terrible happens to Alice and her mother's relationship with Paul breaks down, she only has her bunny for comfort as nobody believes her.

Meanwhile in a 'now' time setting, Abigail is happily married to Jackson and they have a beautiful baby called Izzy.  Abigail starts to get texts, emails and phone calls telling her that Jackson is having an affair.  She doesn't believe it at first, but then photographic evidence turns up in her inbox.  Her tormentor takes things a step further and tries to alienate Abi's friends by hacking her Facebook account and posting vicious messages on friends' pages purporting to be from Abi.  It becomes clear that her tormentor must be somebody who is close to her and has access to her house...

So what does Abi have to do with Alice, you might ask.  Well, Carol Wyer has managed to cleverly weave an intricate web of secrets and lies that ties your brain in knots!  I haven't even mentioned the excitement of bodies starting to turn up with toy rabbits placed at the scene.  Alice is back for revenge and she may very well be hiding in plain sight.  Nobody is safe, however tenuously linked to her past, in her quest for retribution.

A cracking first thriller from Carol Wyer that had me reading late into the night - I absolutely could not rest until I had discovered all the dark secrets of Little Girl Lost.


I chose to read an ARC and this is my honest an unbiased opinion.