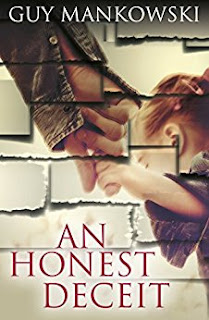 When Ben and Juliette's young daughter dies in a tragic accident on a school trip, they begin searching for answers. But will they ever know the truth? What was the role of the teacher on the trip - and are the rumours about his past true? As Ben and Juliette search for the truth and the pressure rises, their own secrets and motivations are revealed.... An Honest Deceit is an intelligent and gripping contemporary psychological thriller that questions not just the motives of others, but the real reasons for discovering the truth.


I was drawn to this book, not only because Urbane Publications publish amazing books, but because the author currently lives in Newcastle.  Irrespective of the way that I came across this book, I am so pleased that I have read it.  I even started recommending it part way through, ensuring that my Mam was waiting eagerly in the wings to read it after me.  I am actually still very angry at the fictional school every time I think about it, so it just shows the depth of emotions that An Honest Deceit stirred in me.  I say stirred, more like whipped up like a whirlpool...do NOT mention Headmaster Paul Kraver to me or my blood pressure will spike!

When Ben and Juliette send their daughter, Marine, on a school trip they had no idea that it would be the last time they ever saw her. As they fight the school to find out what happened, their relationship feels the strain as they come up against one brick wall after another.  Will they ever find out the truth or will the school be successful in covering it up?

Ben knows how schools work, he is a teacher at the senior school and was the shining star of 'Educating Bristol'.  This is something that Headmaster Paul Kraver clearly resents and he sees an opportunity to take Ben down a peg or two by turning Marine's death into an excuse to investigate Ben's fitness to teach.  Paul Kraver is one of those odious people who get jobs because of who they know not what they know.  He thinks he is protected by the board of governors and can therefore do what he wants.  What he has underestimated, however, is the strength of public emotion.  When Ben and Juliette take on the school they have the support of an enraged public behind them.  Nothing is more powerful than the voice of the people, especially enraged people.


What an emotional read this was.  It wasn't so much that I cared about the characters but I found myself getting more and more angry at the bureaucracy that they came up against.  I kept wanting to shout out that a little girl had died, who cares if you could lose your job by speaking out, she lost her life!  It's a rather sobering thought as human nature conflicts between helping others and saving your own skin.


An Honest Deceit is an absolutely breathtaking, outstanding and powerful book that hooks you very quickly, so you could quite easily read it in one day.  It evoked such strong emotions in me that I had to wait a while before writing my review or it would have ended up being a rant against school bureaucracy and undeserving people in positions of power.  I wholeheartedly recommend this book to EVERYONE!  Ruth Dugdall said that Guy Mankowski has created a sub-genre in crime fiction and I couldn't agree more.  It's something so completely unique to anything I have read before and it will appeal to every reader.  Don't miss this one!