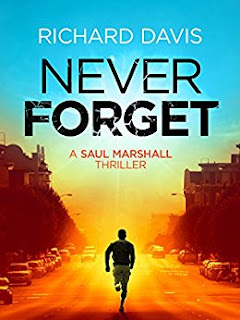 Saul Marshall is on the run.

As a wave of seemingly random assassinations engulfs California, Marshall finds himself drawn into a situation spiralling out of control.

He soon discovers some of the webs’ most secure protocols have been compromised by a rogue team of former Chinese agents. When Marshall realises what they plan, the stakes are raised…

And that’s before the Secretary of State gets involved. Can Marshall unravel the deceit and tricks before it’s too late? Can he stop the carnage, or will he become part of it? One thing is for certain: either way his enemies will never forget.


I absolutely LOVED the first Saul Marshall thriller, False Prophet, and you can read my review here so I started reading Never Forget straight after as I couldn't get enough of Saul Marshall.  We are introduced to Saul again as he listens in to police radio.  He's like a modern-day real-life Batman: a shadowy vigilante trying to put a spanner in the works of criminals on the streets of California.  When he hears something on police radio, he starts his engine and rushes to the scene.  What he sees puts him on a rollercoaster he can't get off and when a lady needs his help he puts on his bat-cape and (hopefully) saves the day (and the girl).

Saul swoops in to save the damsel in distress and teams up with Ellen, the attempted abductee, and puts together all the pieces of the puzzle to see why she is so valuable.  Saul is a wanted man so he can't go to the authorities but he still has some friends in law enforcement who are willing to put their jobs on the line to help him.  As he helps Ellen, he puts himself back on the radar again and he must be one step ahead to avoid being caught whilst removing the threat that could tear the government apart.

Wow!  What a ride!  I love the character of Saul Marshall, he could be any man on the street.  It's absolute genius to have a main character who was a con-man, FBI agent and now a wanted man.  If Saul is Batman, then Vann is definitely Robin; his trusty sidekick who can swoop in to save the day.  Although this was a bit too techie for me at times, it is a fantastic edition to an AMAZING series.  I'm not a fan of politics but I will grab with both hands any political thrillers starring Saul Marshall.  Hollywood, take note, Saul Marshall is destined for the big screen!

I chose to read to read an ARC and this is my honest and unbiased opinion.