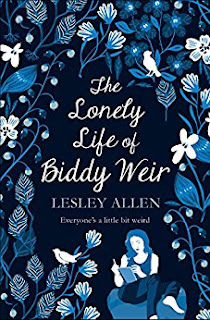 Biddy Weir is a quirky girl.


Abandoned by her mother as a baby, and with a father who's not quite equipped for the challenges of modern parenting, Biddy lives in her own little world, happy to pass her time painting by the sea and watching the birds go by. That is, until she meets Alison Flemming.

Because there are a few things about Biddy that aren't normal, you see. And Alison isn't afraid to point them out to the world.

All of a sudden, Biddy's quiet life is thrown into turmoil. If only there was someone to convince her that, actually, everyone's a little bit weird . . .

A story of abuse and survival, of falling down and of starting again, and of one woman's battle to learn to love herself for who she is, The Lonely Life of Biddy Weir is Lesley Allen's startlingly honest debut novel.


Firstly, I just have to say that this book has a simply stunning cover.  It reminds me of the forest that grew around Sleeping Beauty, shielding her from the outside world...which links very nicely to my feelings towards Biddy Weir.  I would have liked to have created a shield of thorns to protect her from spiteful girls with such hurtful words, but unfortunately the world is cruel and apparently what doesn't kill us makes us stronger.

Biddy isn't like the other children at school, she's very comfortable with her own solitude and is happy to spend her time painting birds and examining their poo.  She lives with her father and without a female influence she has to find her own way in the world.  This is something that the other children exploit and Biddy finds herself the cruel butt of jokes at the hands of the ringleader, Alison Flemming. Alison is a spiteful girl who will do anything to be the most popular and pretty girl in the school.  She doesn't realise that when you peel away her outer layer, underneath it all she is an ugly, bitter girl.

All the cruel taunts and name calling have a heartbreaking effect on Biddy and many years later she finds herself living as a recluse. She has been told so often that she is weirdo that she believes it and acts like one.  Of course, there's absolutely nothing wrong with being weird, it's part of the beauty of the human race.  Who is to say what is weird and what is not?  Then one day Biddy is introduced to Terri, who is a little bit weird herself, and Biddy can finally talk about what happened to her as a child.  As she talks, she begins to heal and I hope perhaps finally realises just how special she is.

This was an emotional rollercoaster of a read.  I was furious with Alison Flemming and her team of mean girls, albeit fictional characters but we all know they exist.  Through their cruel jibes they have scarred Biddy for life and no matter how many times you tell yourself that 'sticks and stones may break your bones', unfortunately words do ultimately hurt you.  I wanted to tell young Biddy what my Nanna told me: 'You'll see your day, pet.' but you'll just have to read this fantastic book to find out whether Biddy sees her day.

You will go through a rainbow of emotions on this journey with Biddy Weir: anger, sadness, heartbreak and happiness as the beautiful Biddy-shaped butterfly emerges from her weird chrysalis.  An uplifting, brave and stunning debut from Lesley Allen worthy of every single one of the 5 stars I have awarded.