With Deadly Intent - K. A. Richardson 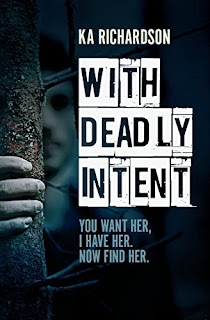 EVIDENCE
When Crime Scene Manager, Cass Hunt, is called to a fatal road traffic collision in the dead of night, not all is as it seems and the last thing she expects is to end up working on a murder case with DCI Alex McKay.

INVESTIGATION
More gruesome murders, a dead dog, and a startling revelation has the whole of the North East Police force reeling.  Will they catch him before his latest prize becomes another victim and he fades into the shadows once more?

DARKNESS
From the tree-line, someone is watching, and he doesn't like where the investigation leads. Taking his time, he plans and executes each kill.  He will not rest until his job is complete.

One thing's for certain, his intent is deadly, he's dangerous and he's coming for her.


How have I gone through the last year without picking up a book by K.A. Richardson?  After seeing so many excellent reviews, it was something that I was quick to remedy and bought all 3 books after meeting the author herself.  I have to say that on picking up With Deadly Intent, I found it IMPOSSIBLE to put down and read it in one day.  So please clear your diary before picking up this book!


Cass Hunt is a Crime Scene Manager for Sunderland police force.  Cass suffers from nightmares about something that happened in her past, making her a fragile and interesting character.  Who better to break down her barriers than DCI Alex McKay?  Alex and Cass are very similar; they both keep their private lives and professional lives very separate.  As much as they try to fight the magnetic pull that draws them together, however, we know that is one battle they won't win.

Sunderland police force are in the midst of investigating a serial killer who always seems to be one step ahead of them.  Only one clue is left behind at each murder scene which has the police puzzled.  As they investigate each murder, the killer gets closer and closer to claiming one of their own.  Can they crack the clues before the time runs out?

On the anniversary of its publication, I picked up With Deadly Intent as my Easter weekend read, not thinking for a moment that I would finish it on the first day of the holiday.  So fast-paced, gripping and at times gruesome, this is a book and a half.  I am astonished that it is a debut and cannot wait to read the next books in the series.