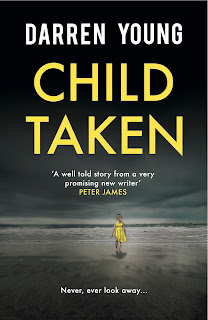 How could such a thing happen?
But it did happen.
I wasn't one of the others, observing.
It happened to me.
One hot summer's day, two-year-old Jessica Preston disappears from the beach. The police are convinced she drowned, but Sandra Preston won't give up hope that her daughter is still alive.
How can she?
Twenty years later, another child goes missing, and Sandra is approached by a young journalist who raises questions about what really happened to Jessica Preston all those years ago. But when the journalist discovers someone with an explosive secret, it threatens not only to reveal what's been covered up for so long, but puts both their lives in danger.


As debuts go, this is pretty spectacular; it must be one of the best debuts I have EVER read.  It drew me in from the very start and I found it impossible to put down, finding myself reading far later into the night than I usually would.

2 year old Jessica Preston was taken from a crowded beach one sunny day.  Everyone searching for her was convinced that she had drowned, everyone that is except for her mother.  Her mother, Sandra, never gave up hope that one day she would be reunited with Jessica and her absolute surety in this has resulted in her being incarcerated in a mental institution after her husband drank himself to death and her son went into foster care.

Aspiring journalist, Laura Grainger picks up a story of a child going missing in a shopping centre.  Whilst doing her research, she stumbles on the 20 year anniversary of Jessica's disappearance and wants to interview Sandra Preston as part of her story.  Although the missing child from the shopping centre is quickly found, Laura presses on with her urge to visit Sandra and pick up the unsolved mystery of Jessica Preston.

Danni Edwards reads Laura's story just after she heard her parents having an argument about whether they should tell her something or not.  Danni contacts Laura and they look into the possibility of Danni being missing child Jessica Preston.  Danni knows her parents are hiding something but if she's wrong it could blow their whole relationship apart.  Will Jessica ever be found or is this one mystery that is destined to remain unsolved?

I loved the way this was written in parts, with each part starting with a passage from the current 'father' and the birth mother of Jessica Preston.  As I was reading I was looking for clues and although I formed an opinion early on, it didn't spoil my enjoyment of the book one bit.  I raced through this book as if my life depended on it and really liked the way that the author put the question: 'what would you do?'.  It's so easy to judge people without knowing the whole story and, not that I would condone child abduction for a second, but you can see how one bad decision can spiral out of control until you have no choice but to go whichever way the wind takes you.  Darren Young has written characters who are not monsters but simply parents looking to give their love to a child, which unfortunately is not always the ending that you get with child abductions.

Keep an eye on Darren Young, if this is the standard of his debut I have no doubt that there are many more mouthwatering novels to come from his pen.  A definite recommended read from me and worthy of every single one of the 5 stars I have awarded. 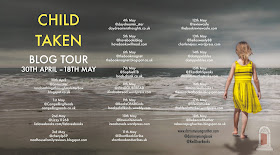 Darren Young was born in 1971 in the West Midlands and now lives in Nottingham with his wife, Luisa and their two children, Alessio and Emilia.

His background is in customer service, working in financial services and then as a consultant in the UK and Europe, then later a director with CSN. He has a master’s degree in business administration.

He’d always enjoyed writing – he used to chronicle his family holidays as a child – and, in his spare time, along with the occasional game of tennis, he wanted to try his hand at writing a real book but didn’t think there was enough room in his already busy life to fit it in.

Luckily, he found a sympathetic coffee shop and plenty of encouragement from those around him and he began working on Child Taken at the end of 2014 after hearing a radio news bulletin whilst in the car and having an idea before the end of the journey that is 95% intact in the published book.

Darren is currently writing his next novel.