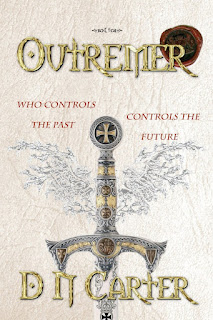 
An epic love story must overcome religious divide and a plot to eradicate two blood lines, as the Crusades and the search for the ancient mysteries of the Holy Grail gather momentum.

Raised by his father in La Rochelle, France, Paul Plantavalu is known for his artistic nature, inquisitive mind and Christian faith. He also has an unshakable love for his Muslim childhood friend, Alisha al Komaty. Courageous and outspoken, she returns Paul’s love. But their path is paved with obstacles; religion, war, political chaos and a mysterious enemy determined to destroy their family lines.

Sometime between 1110 AD and 1120 AD in the aftermath of the first crusade, a small band of nine knights — the founding knights Templar — recover ancient precious artefacts left by a former, advanced civilisation, beneath the City of Jerusalem. Ruthlessly guarded, the secrets revealed by this discovery are highly prized by powerful and dangerous forces far and wide; the repercussions of their capture are inextricably linked to Paul and Alisha. As Paul starts to experience dark and vivid dreams and the fragile balance of peace starts to crumble, it will fall to an enigmatic man known as Kratos and his female warrior protégée Abi Shadana, to safeguard Paul and Alisha.

Paul and Alisha’s love story weaves between the threads of our reality and other realms — from the Druids to the Sufi mystics, the Magi of the East, the secret political arm of the Knights Templar and the Isma’ilis, the Assassins. Knights and pilgrims alike will witness some of the darkest battles ever fought. The discovery of a unique sword’s lethal power and whispered connections to King Arthur and the Holy Grail lead Paul and Alisha to question if their lives ever be the same again.

The first of a four-part series, Outremer is an historical epic, which sweeps across England, Scotland and France, to Syria, Jerusalem and Egypt. Discover the truth — and crack the ancient code — behind the great mysteries of the High Middle Ages for yourself.

I admit to feeling slightly daunted when faced with the HUGE brick of a book that is Outremer, which showed as 23 hours of reading time on kindle.  Thankfully, I had both a physical and a digital copy so I swapped between paperback and kindle now and then to give my puny arm muscles a well-deserved break.  On turning the first page there is a helpful list of main characters with some amazing images so we don't even have to imagine what each character looks like.  I have to say that there are a lot of characters so it did take me quite a while to get into the book, but once I did I found that I couldn't wait to read the next instalment in this riveting story.

The story of Paul and Alisha is cleverly told through the words of a sword-wielding stranger taking shelter at an inn in France.  As he tells his epic tale to the patrons of the inn, they became as eager for the next part of the story as I did.  Paul is a Christian who falls in love with Alisha, his best friend's sister who is a Muslim.  Due to their different religions, they fear that they can never be together but their fate has already been mapped and their fathers arrange an ancient ceremony so that they can be married.  As they travel across the lands to protect their bloodline, they encounter many who would harm them but equally as many who would die for them.

I felt as if I could be sat around the fire in the inn myself, as the stranger discussed the origins of legends, words and biblical history.  I am rather partial to ancient history, particularly Egyptian history, so I found this absolutely fascinating.  Often, my eyes would widen in surprise as the origins of many words were revealed and I found myself recounting this information, like the stranger in the inn, to my own captive audience.

Despite it being such a huge epic novel, I felt as if we have only just begun to scratch the surface of the amazing story that DN Carter has to tell us.  It's an epic story that will delight any historical fiction lover, and make you look at ancient history in a completely different light.  Although it makes Game of Thrones look like a novella, do not be put off by the size of Outremer as once you get into it you will realise that it's not even nearly long enough.

I chose to read an ARC and this is my honest and unbiased opinion.  I am delighted to release my review as part of the blog tour. 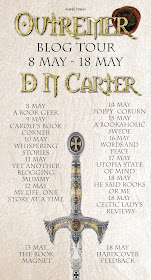 About the author:
After strange and vivid experiences whilst living in Cyprus as a child, author D N Carter has been fascinated by the history, myths and legends of the Middle Ages and mankind’s past. As he got older travels to Pyramids of Giza in Egypt, the Languedoc region of France and the deserts of Arabia fuelled his enthusiasm. While not decoding maps and mathematical codes D N Carter enjoys adventure sports from parachuting to microlight flying. Today he divides his time between East Anglia in the UK and the south of France with his family.
Michelle Ryles at 00:01
Share