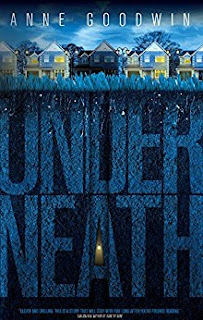 He never intended to be a jailer …

After years of travelling, responsible to no-one but himself, Steve has resolved to settle down. He gets a job, buys a house and persuades Liesel to move in with him.

Life’s perfect, until Liesel delivers her ultimatum: if he won’t agree to start a family, she’ll have to leave. He can’t bear to lose her, but how can he face the prospect of fatherhood when he has no idea what being a father means? If he could somehow make her stay, he wouldn’t have to choose … and it would be a shame not to make use of the cellar.

Will this be the solution to his problems, or the catalyst for his own unravelling?


I really enjoyed Anne Goodwin's amazing debut, Sugar and Snails, so I was eager to see what Anne had written next.  Firstly, I have to say that the cover of Underneath is fabulous - it's so dark with a little glimmer of light under the earth, giving us a little hint of what we can expect inside.  Whereas Sugar and Snails was heartrending and emotional, if I had to describe Underneath in one word it would be DARK.  As different from Sugar and Snails as chalk and cheese, Anne Goodwin turns to the dark side in her new novel, Underneath.


Steve and Liesel have a rather strange meeting in the canteen at work when Liesel mistakes Steve for someone else.  The pair hit it off immediately, and although traditionally men do the chasing I felt like Liesel was firmly in the driving seat from the offset.  We find out quite quickly that Liesel doesn't want children and Steve is more than happy about that...we perhaps understand the reason for this through several flashbacks to Steve's childhood.  When Steve starts house-hunting he is drawn to one with a particular feature: a cellar. Liesel doesn't seem that keen on moving in with Steve and when he reveals his obsession with the cellar the alarm bells weren't just ringing they were playing RUNAWAY!

I've read my fair share of twisty psychological thrillers, so I know things are never what they seem.  When I was reading passages about someone being locked in the cellar, I wondered who it was.  Liesel seemed far too streetwise to find herself in that predicament but then I didn't know what was going on in Steve's mind.  After reading about his younger self it was clear how very damaged and twisted he was from an early age, not helped by all the mind games being played by his twin sisters.  The more I read about Steve, the more I disliked, or rather detested him and it is through the intensity of Anne's writing that these emotions were stirred up in me.


Dark, twisted and compelling, Underneath is filled with tension and intrigue.  I found it so intriguing that I read it in a few days but I feel a little bit on the fence with this one.  I enjoyed most of it and felt like we really got to see inside Steve's head, however uncomfortable that was at times, but I was left feeling slightly unfulfilled and with a bit of a question mark at the end.  I wasn't sure what was real and what was in Steve's head, and that's not necessarily a bad thing, I just have to dust off my imagination and make up my own mind.


I chose to read to read an ARC and this is my honest and unbiased opinion, and I am releasing my review as part of the blog tour. 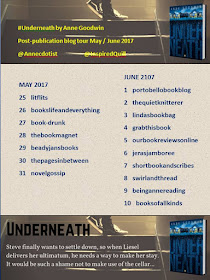