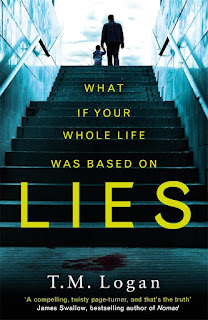 Joe Lynch is just an ordinary happily-married man - until one split-second decision throws his life into crisis.


When Joe sees his wife having a confrontation with family friend Ben, it's the first hint that she's been lying to him - about everything. And when he steps in to protect her, a harmless shove knocks Ben to the ground. And he's not moving...
Gripping, unputdownable and packed with twists and turns from the first page to the very last, this stunning psychological thriller will make you question whether we can ever really trust the ones we love . . .


I love, love, LOVED this book.  It's one of those 'just one more chapter' kind of books that you just can't put down.  I whizzed through it like a tornado, not knowing what was the truth and what were lies and boy are there a lot of lies in this book, as you would expect from the title.


Joe thinks he has the perfect marriage, he is married to Mel and they have an inquisitive little boy, William.  One day Joe is driving William home when William spots 'mummy's car', Joe humours him at first then realises the car isn't just the same make and model as Mel's it IS Mel's car.  What is she doing going into a hotel car park when she is supposed to be playing tennis?  Joe follows her into the hotel and sees her arguing with Ben, a friend of the family.  Joe goes back to the car park with William and confronts Ben but as the pair square up to each other Joe pushes Ben and he falls.  As Joe bends down to see to Ben, William gets out of the car with an asthma attack and there's no inhaler in sight.  Joe's choice: check Ben is ok or save his son's life - no brainer, so Joe heads for home and returns later to find that Ben has gone so he must be ok, right?  WRONG!

A few days later Ben's wife reports him missing and when she also uncovers a secret mobile phone containing naked pictures of Joe's wife Mel, the police focus all their attention on Joe.  There may be no body but there's also no sign of Ben and as the evidence mounts up, it's only a matter of time before Joe is arrested for Ben's murder.  Joe believes that Ben is still alive as he is posting on social media so Joe heads up to Sunderland, Ben's home town, to get proof of life and clear his name.  I always enjoy seeing places near where I live in print, so it was a nice surprise to see Sunderland mentioned.  Joe has no idea what he is up against or how much danger he is in...can he uncover the truth before it's too late?

Phew, what a scorching read; I almost got third degree burns I was flipping the pages so fast.  I thought Joe was a bit of a weak house-husband at first, but when his family life is threatened he really steps up to the mark.  He is so trusting that he believes everything he is told and wouldn't be able to spot a lie if it had a label attached to it.  That was what was so great about the book: trying to work out who was lying and who was playing who.  A couple of times I asked myself, 'is nobody telling the truth in this book?', then answered myself, 'er, the book's called LIES'.

Lies is a VERY impressive debut; I actually had to double check it was a debut novel.  It's so addictive you really won't be able to put it down and it will have your brain in such a tizz that you won't be able to tell truth from lies, so don't even try to guess the ending!