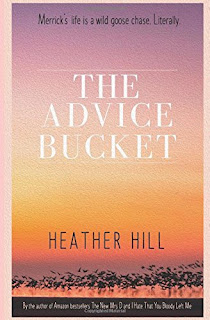 
Somewhere on the remote, Scottish isle of Scarba, Gladys awaits answers. What is the centuries-old secret that rules her destiny? A short distance away, Merrick is on his way to join 35,000 fellow barnacle geese at their annual gathering. Delayed by a sudden fall from the sky, he sustains his first wrist injury in three centuries, and has to catch a boat. Lucy Colwyn wants to go to Scarba to die; if she can only get there unscathed first. Eminent neurologist, Dr. Britten, receives miraculous news: a dying patient is cured. He now has no choice but to abandon everything and track her down before she does the unthinkable. But the journey won’t be easy, as three familiar old ladies have other, rather unorthodox agendas. The Queen of The Hebrides leaves for Islay loaded with strangers. By the time it reaches at its conclusion, some of the passengers are on their way to reaching another. That they’re more connected than they could ever have imagined.

The Advice Bucket is a comedy-fantasy, and is Heather Hill’s third novel.

From the author of International Best-Sellers, ‘The New Mrs D’ and ‘I Hate That You Bloody Left Me.’


There's a surprise on every page of this fabulous book. It's so completely different, filled with life stories and humour that you are guaranteed to have a tear in your eye at some point in the book.

There are lots of interesting characters in the book but the main story revolves around Lucy. Lucy has been diagnosed with a terminal illness and having lost her only daughter, decides to travel to remote Scarba island to end her life. Scarba means a lot to Lucy as it is where her mother apparently committed suicide many years ago. It is while Lucy is en route to Scarba that her doctor, Doctor Britten, receives the amazing results of a trial that Lucy has been involved in. Can he reach Lucy in time and does she have anything to live for?

Merrick meanwhile, is also making his way to Scarba as a barnacle goose, when the unearthing of a hidden spell finds him thrust into human form. He needs to meet back up with his flock but it's not only his goose family waiting for him on Scarba...

The Advice Bucket blurs the lines between dying and living forever, they are perhaps one and the same thing. It is a poignant story of living with a terminal illness and a magical account of immortality, with a smattering of Scottish humour that will leave you with a smile on your face. On a serious note, it also draws your attention to the plight of these barnacle geese and the Scottish government's attempts to reduce their numbers. It was not something that I was aware of until now and looking at the amazing photo on the cover of the book, wonder how anyone could harm these majestic creatures.