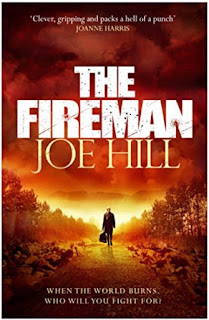 Nobody knew where the virus came from. FOX News said it had been set loose by ISIS, using spores that had been invented by the Russians in the 1980s. MSNBC said sources indicated it might've been created by engineers at Halliburton and stolen by culty Christian types fixated on the Book of Revelation. CNN reported both sides. And while every TV station debated the cause, the world burnt.

Pregnant school nurse, HARPER GRAYSON, has seen lots of people burn on TV, but the first person she saw burn for real was in the playground behind her school. But when she realises she has become infected, she is determined to find a way to survive - at least long enough to see her child born. No matter what is left of the world for them to live in.

With the epic scope of THE PASSAGE and the emotional impact of THE ROAD, this is one woman's story of survival at the end of the world.


The Fireman is quite a weighty book at 762 pages, so this is one I would recommend reading on your kindle if, like me, you get tired arms from reading heavy books.  I thought the idea was good: a deadly spore spreading across the world setting people on fire but I was a bit disappointed that I didn't get the end of the world fear coming through the pages.  That being said, it's still an interesting read but, in my opinion, the blurb doesn't really match the book as it's not quite the end of the world epic that I was expecting.


Harper is a school nurse with an obsession with Mary Poppins and she has to look on the bright side as she has a crazy husband, Jakob.  Jakob has a plan if they ever contract the deadly virus named dragonscale: they would put on their favourite music, drink their expensive bottle of wine, take some pills and die in each other's arms.  He doesn't really ask Harper's opinion of this but when she finds out that she is pregnant and infected with the 'scale her one aim is to survive long enough to give birth.  Now, I couldn't decide whether she was stupid or selfish at this stage.  Even though there was a chance that the baby would not be infected, why would you want to bring a life into a world that is burning around you?

When Jakob's craziness reaches new heights, Harper meets John Rookwood, aka The Fireman, and his two young companions: Allie and Nick.  They are all infected with the 'scale and have found a way to survive so they invite Harper to Camp Wyndham, where she meets other infected survivors.  This is where I lost interest a smidge as it was all a bit too much peace, love and harmony for me, sitting round the campfire singing kum ba yah.  Of course, put a crowd of people together and the harmony doesn't last long as they jostle for position to be the alpha male, or female.  My interest was piqued again as the camp started to implode and new allegiances were formed, and I tried to work out who Harper could trust.

The Fireman himself is a great character and I would have liked to have learned more about him, although I think that is part of his mystery that you never really find out who he really is. The Fireman is definitely a rollercoaster read as it has more than its fair share of ups and downs and it is good post-apocalyptic thriller but I think a shorter book would have been more intense.

I chose to read an ARC and this is my honest an unbiased opinion.