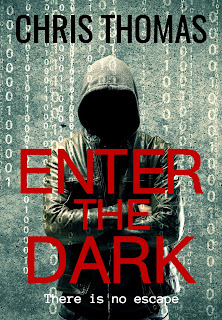 An anonymous website, a few clicks, and Joe Henderson’s life is changed forever.

‘The Red Room’ is the only place where the failings of a weak justice system are righted and where the line between good and evil becomes blurred. When the lights go up, viewers bid, criminals are punished, and the Brotherhood of the Righteous broadcasts a show like no other.

The room has remained hidden until now, when a video arrives in the inbox of the Metropolitan Police Cyber Crime Unit. But outclassed, outplayed, and torn apart by corruption, is there anything Detective Pete Harris andhis team can do except watch?

Their only lead may be the room’s latest bidder, Joe Henderson. Because when Joe found the Red Room, it found him too, and now the Brotherhood are watching through the wires, willing to do wrong for a righteous cause.

As they pull Joe deeper into the dark web, will he find any mercy or a way out? And could he be the Red Room’s next volunteer?


I'm seeing references to the dark web creeping into novels these days but there's no such creeping in Enter the Dark as we hurtle full speed into the eye-opening world of the deep/dark web.  I'm so pleased that I was resting my kindle on my lap as I could have easily dropped it during some episodes of 'The Red Room' as I instinctively threw my hands up in horror.  So what's Enter the Dark all about? Read on...if you dare.

Joe is just a normal guy, spending time with his friends, running his family business and looking forward to marrying his girlfriend, Ellie. On a night out with the guys, Billy, one of Joe's friends introduces him to the dark web.  It was only meant to be a bit of fun but once Joe has tasted the forbidden fruit he wants more.  Intrigued by an anonymous site that costs well over £600, being 1 Bitcoin, just to enter it, Joe convinces Billy to show him how Bitcoins work.  Once the guys are in, they find a holding page from The Brotherhood inviting them to an event which costs 2 Bitcoins to view.  Billy walks away but Joe is caught in the web of temptation and is soon drawn deeper into The Red Room until he can't help himself playing a more active role in proceedings.  Joe thinks he's safe behind his screen and he has no idea what has he got himself tangled up in.

The Brotherhood of the Righteous is an online group of vigilantes who dole out punishment to criminals who, in their eyes, have not been punished enough.  They search out convicted criminals with new identities, living their life when their victims are unable to do so and the viewers of the show compete to be the highest bidder who can select their punishment.  The police get involved when one such criminal, living under a new identity complete with an electronic tag, goes missing leaving her tag behind.  As the police race to discover the location of The Red Room, Joe's virtual world and real world collide as the Brotherhood come to collect his debt.


Stomach clenchingly gruesome, Enter the Dark is a modern chiller thriller that will turn even the most cast-iron of stomachs.  I gritted my teeth and clenched my stomach on each episode of The Red Room as the various methods of punishment were described in bone crunching detail.  The punishments reminded me a bit of the film, Saw, in the way that you don't want to watch but you can't help it. Like Joe, I thought what harm can it do, it's not real, right?

It's an absolutely superb debut from Chris Thomas and I was powerless to tear my eyes away from the page, even though sometimes I wanted to hide behind the sofa.  Dark by name and dark by nature, Enter the Dark is a recommended read for all thriller fans who like something a little bit darker. 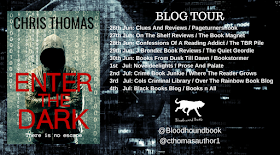 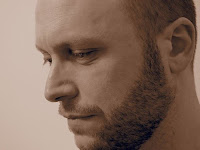 Chris Thomas was born near London in 1978 before moving to Buckinghamshire a few months later. He attended the University of Bristol, graduating with a degree in psychology in 1999. It was here that he developed his interest in criminal psychology and serial killers.

After a brief stint working at an investment bank in London, he left the City to work for his wife’s family business, a position he still holds.

Chris is an avid film fan, especially horror, thrillers and dark comedy- something that he tries to blend in his writing. After attending a creative writing course, he gained the confidence to pursue his dream of writing a novel. He self-published his debut novel The Red Room in February 2017 before joining the Bloodhound Books stable and re-releasing the book as Enter The Dark.

Further works are already in the planning, including a sequel to Enter The Dark, which is intended to be even more dark and disturbing!

In his spare time, Chris enjoys karate (holding a black belt) and spending time with his wife and two young daughters.
Michelle Ryles at 00:07
Share