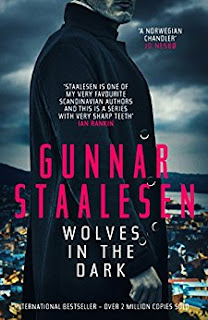 Reeling from the death of his great love, Karin, Varg Veum's life has descended into a self-destructive spiral of alcohol, lust, grief and blackouts. When traces of child pornography are found on his computer, he's accused of being part of a paedophile ring and thrown into a prison cell. There, he struggles to sift through his past to work out who is responsible for planting the material ... and who is seeking the ultimate revenge. When a chance to escape presents itself, Varg finds himself on the run in his hometown of Bergen. With the clock ticking and the police on his tail, Varg takes on his hardest - and most personal - case yet. Chilling, shocking and exceptionally gripping, Wolves in the Dark reaffirms Gunnar Staalesen as one of the world's foremost thriller writers.


It felt a little bit daunting when I picked up Wolves in the Dark, as I hadn't realised how many earlier Varg Veum books there were - this is number 21, in case you are wondering.  I was worried that joining a series so late would lessen the enjoyment of reading the book, but I am delighted to report that it works so well as a standalone that it left me wanting to find out more about Varg's back story.


The drama begins on the very first page when Varg is awoken by the police as they turn up at the crack of dawn to arrest him for having shocking images of children on his computer.  Varg has never seen the images before but with such compelling evidence stacked against him, he struggles to prove his innocence.  Whilst being investigated he tries to remember anybody who might bear him a grudge.  It took me a little while to get used to the writing style at this point, as it wasn't clear to me that we were reading about Varg's past so I was wondering how he got out of custody.  Once the penny dropped, I got used to it and although I didn't need a 'then' and 'now' chapter heading, something like a '3 years ago' hint would have alleviated my confusion.


The storyline is quite serious and shocking at times, but I loved the little bits of Gunnar Staalesen's dry humour sprinkled throughout - Varg's rapid-fire quips and humorous anecdotes did make me laugh on more than one occasion.  The thing that intrigued me the most about Varg is that he's a private investigator who's not very good at following people.  He doesn't really care about his work either, since he lost his lover Karin, all he cares about is picking up his next bottle of Aquavit (a Scandinavian spirit).  He reminded me of Dr House and his addiction to Vicodin - both struggling to block out the pain by any means necessary.


Wolves in the Dark is one of those fast-paced sweaty palm sort of books; you could feel the net closing in and the clock ticking down whilst the hunted man is still struggling to prove his innocence.  It's a book that makes me simultaneously want to reach for the back-catalogue as well as seeing when the next instalment is coming out - now that I've been introduced to Varg mid-series I definitely want to know more.  A brilliant introduction to the Varg Veum series; giving us a glimpse of such a well established character certainly left me thirsty for more.

I chose to read an ARC and this is my honest and unbiased opinion.  I am releasing my review as part of the blog tour. 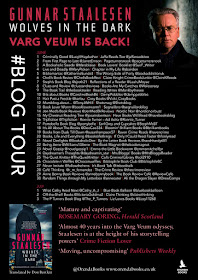