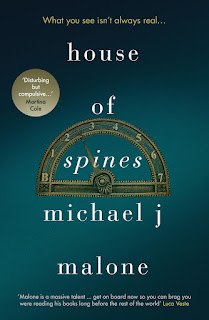 Ran McGhie's world has been turned upside down. A young, lonely and frustrated writer, and suffering from mental-health problems, he discovers that his long-dead mother was related to one of Glasgow's oldest merchant families. Not only that, but Ran has inherited Newton Hall, a vast mansion that belonged to his great-uncle, who appears to have been watching from afar as his estranged great-nephew has grown up. Entering his new-found home, he finds that Great-Uncle Fitzpatrick has turned it into a temple to the written word - the perfect place for poet Ran. But everything is not as it seems. As he explores the Hall's endless corridors, Ran's grasp on reality appears to be loosening. And then he comes across an ancient lift; and in that lift a mirror. And in the mirror... the reflection of a woman...

A terrifying psychological thriller with more than a hint of the Gothic, House of Spines is a love letter to the power of books, and an exploration of how lust and betrayal can be deadly...


I could not contain my excitement when I heard that Michael J. Malone had written a new book; his previous book, A Suitable Lie, was one of my Top 20 Books of 2016 and I'm still recommending it to people, almost 12 months on.  Michael J. Malone is clearly a natural storyteller and incredibly versatile author as House of Spines is so different from A Suitable Lie.  Where one is raw and emotional, another is dark and gothic but both are linked by the psychological thriller genre as Michael J. Malone certainly knows how to get inside a reader's head and under their skin.  House of Spines is as goosebump-inducing as it sounds and, although the spines in the title refer to books rather than skeletons, there are one or two skeletons preparing to leap out of Ran's closet (ghost-train style).

Ranald McGhie thinks he's alone in the world after the death of his parents but, unbeknown to him, his mother had a living family of which she never spoke.  Ran finds out that he had a Great-Uncle when he is bequeathed a house in his will, but it's not just any old house: Newton Hall - a mansion with a gorgeous swimming pool, a library that turned me green with envy and a haunted lift.  Yes, a haunted lift...or so it would seem.  Ran has a history of mental health problems and he meddles with his medication so you're never quite sure how much is real and how much is in his head.

I love books where you want to know as much about the past as the present, although this isn't a traditional dual-storyline type of book, rather a past that refuses to let go of the present.  I wanted to know as much about Great-Uncle Alexander and his love for Jennie, the servant girl, as I did about Ran in the present day.  Ran's interactions with his newly found cousins, Marcus and Rebecca, had me seething with anger: Marcus is so dastardly and Rebecca so bitchy that they would go to any lengths to get Ran to sell the house to developers so they would get a share of the proceeds, but just how far will they go?

Alexander's love for books is a common theme throughout and the vivid description of his library made me feel as if I had jumped inside the book and seen it for myself.  Alexander's other great love was Jennie and their story continues to haunt me long after I finished House of Spines; leaving me considering whether it was unrequited love or true love.  There are always two sides to every story and I really didn't know which one was true.  Apparently, true love never dies but perhaps it haunts you forever!

Cleverly written to be either a ghost story or one man's struggle with mental health, House of Spines is another exceptional book from Michael J. Malone.  I read most of it with goosebumps on my arms and the hairs standing up on the back of my neck, as I loved the ghostly gothic feel.  House of Spines is a spine-tingling multi-genre novel that absolutely anyone and everyone will enjoy; it's a psychological thriller mixed with a gothic horror and I loved every single page of it.

Michael Malone was born and brought up in the heart of Burns' country, just a stone's throw from the great man's cottage in Ayr. Well, a stone thrown by a catapult, maybe.

He has published over 200 poems in literary magazines throughout the UK, including New Writing Scotland, Poetry Scotland and Markings. His career as a poet has also included a (very) brief stint as the Poet-In-Residence for an adult gift shop. Don't ask.

BLOOD TEARS, his debut novel won the Pitlochry Prize (judge:Alex Gray) from the Scottish Association of Writers and when it was published he added a "J" to his name to differentiate it from the work of his talented U.S. namesake.

He is a regular reviewer for the hugely popular crime fiction website www.crimesquad.com and his blog, May Contain Nuts can be found at http://mickmal1.blogspot.com/ 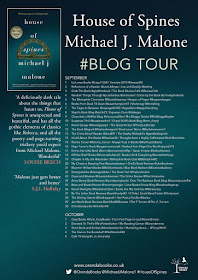