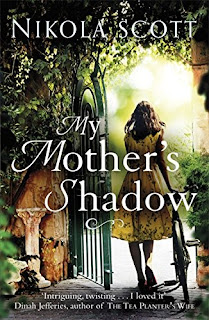 Hartland House has always been a faithful keeper of secrets...

1958. Sent to beautiful Hartland to be sheltered from her mother's illness, Liz spends the summer with the wealthy Shaw family. They treat Liz as one of their own, but their influence could be dangerous...


Now. Addie believes she knows everything about her mother Elizabeth and their difficult relationship until her recent death. When a stranger appears claiming to be Addie's sister, she is stunned. Is everything she's been told about her early life a lie?

How can you find the truth about the past if the one person who could tell you is gone? Addie must go back to that golden summer her mother never spoke of...and the one night that changed a young girl's life for ever.


In her debut novel, My Mother's Shadow, Nikola Scott uses the tried and tested dual timeline to draw readers into the story and it works a treat.  With secrets to uncover, the pages turn effortlessly as we learn the story of Elizabeth Holloway through her diary excerpts.  Her eldest daughter, Addie, never felt as if she was good enough for her mother and her mother's death a year prior means that Addie can never get answers to the questions that still float around in her head.

As the Harrington family gather to remember Elizabeth on the first anniversary of her death, they are disturbed by a stranger at the door. A stranger, Phoebe Roberts, who claims to be Elizabeth's daughter and she has the same date of birth as Addie.  When Addie finally accepts that Phoebe is telling the truth, the newly reconnected sisters try to understand why Elizabeth kept one twin and gave away the other.  Only by understanding what happened in the past, can Addie make sense of the strained relationship she had with her mother, and find the answers that she craves.

My Mother's Shadow is quite an emotional read; 1958 doesn't seem that long ago but it felt like the dark ages when I was reading this book.  It just shows how very far we've come in the treatment of women and it also reminds us all that there are two sides to every story.  I had a lump in my throat as Elizabeth's story was revealed piece by piece and my feelings towards her changed at the same time.  I couldn't understand how Elizabeth treated Addie different to her younger siblings, Venetia and Jas, although she probably didn't even realise she was doing it.  There was no doubt that Elizabeth loved Addie but Addie always got the impression that she disappointed her and she wasn't good enough...now we know why.

I loved how Addie jumped to conclusions, the same conclusions as I did, when Phoebe turned up but it transpired to be so very wrong. It's human nature to make such assumptions but if only we would gather all the facts beforehand we could save ourselves some heartache. The family theme is strong in My Mother's Shadow, both past and present, and it kept the story rolling along at just the right pace.

My Mother's Shadow is an emotional story about unearthing well-buried family secrets and how we like to keep things hidden but sometimes a problem shared is a problem halved. 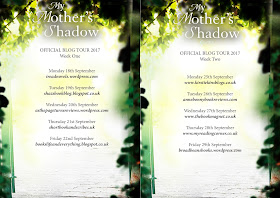