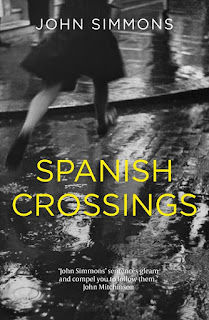 Spanish Crossings is an epic tale of love, politics and conflict, with the yearning but elusive possibility of redemption.

A woman's life has been cast in shadow by her connection to the Spanish Civil War. We meet Lorna in Spain, 1937 as she falls in love with Harry, a member of the International Brigade who had been at Guernica when it was bombed.  Harry is then killed in the fighting and Lorna fears she might have lost her best chance of happiness. Can she fill the void created by Harry's death by helping the child refugees of the conflict? She finds a particular connection to one boy, Pepe, and as he grows up below the radar of the authorities in England their lives become increasingly intertwined. But can Lorna rely on Pepe as he remains deeply pulled towards the homeland and family that have been placed beyond his reach?

Coming through the war, then the post-war rebuilding, Lorna and Pepe's relationship will be tested by their tragic and emotive history.


I have come to the conclusion that John Simmons is a natural storyteller; his books are intricate and meaningful and he continues to amaze me with his latest novel, Spanish Crossings.  His previous novel, Leaves, was one of the first books I reviewed when I first started my blog in 2015 and I consider it to be among my favourite books of the 21st Century.  Spanish Crossings is completely different to Leaves, in that it is based on real events: The Spanish Civil War, however, John Simmons has woven a beautiful and intricate story around this true event.

When Lorna met Harry it was love at first sight but, before their life together even begins, Harry is cruelly taken away from Lorna when he is killed fighting in Spain for what he believes in.  When England takes in Spanish child refugees, Lorna sponsors a child, Pepe, and she is able to channel her grief for Harry into love for Pepe.  Even from a young age and many miles from home, Pepe has strong political beliefs and he and Lorna seem well matched.

When Lorna and Pepe naturally fell in love, I felt that Pepe changed.  He became secretive, suspicious and jealous and my feelings towards him changed.  I was disappointed in Lorna for not standing up to him, then I remembered that this was pre-war England and men ruled the roost.  When Lorna has their son, Jimmy, to think of she does get a bit tougher and makes a difficult decision that she will have to live with for the rest of her life.

There's something so very special about John Simmons' writing.  Take the passage about the doodlebug attack in London: I had goosebumps, it was so vivid that I could smell smoke in my nose and had a ringing in my ears as the dust settled.  It must have been terrifying and for John Simmons to portray that terror through his writing is no mean feat.  As greedy as I am for books, I don't want John Simmons to churn out a book every year; quality such as this is definitely worth waiting for.

Based on real events, Spanish Crossings, is a wonderful historical novel that both educated and delighted me.  A recommended read.