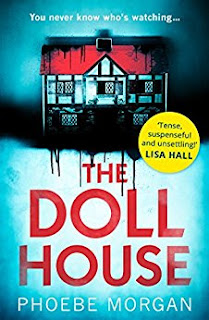 You never know who’s watching…
Corinne’s life might look perfect on the outside, but after three failed IVF attempts it’s her last chance to have a baby. And when she finds a tiny part of a doll house outside her flat, it feels as if it’s a sign.
But as more pieces begin to turn up, Corinne realises that they are far too familiar. Someone knows about the miniature rocking horse and the little doll with its red velvet dress. Someone has been inside her house…
How does the stranger know so much about her life? How long have they been watching? And what are they waiting for…?

Yikes!  What a total creep-fest.  When I was younger, I used to really dislike people watching me.  Not that I was ever interesting enough to look at, but I just didn't like the idea of someone watching me eat, drink or read when I was completely unaware.  So the strapline of The Doll House attracted my attention immediately as you really don't know who's watching you.

Corinne and Ashley are sisters who are both grieving for their father and struggling with troubles of their own.  Corinne is desperate for a baby whereas Ashley has 3 children and, although she loves Ashley's children, it's getting harder for Corinne to cope being around them. Corinne is naturally very fragile and her partner, Dominic, is a reporter so he never seems to be around to support her.  When Corinne finds a piece of a doll house at her front door, she doesn't feel threatened...but she should.  As more pieces start to arrive: at her work and inside her home, the already fragile Corinne feels as if she's falling apart...and that puts her just where her tormentor wants her.

I literally couldn't put it down, so I read The Doll House in a day as I was immediately drawn into the web of intrigue that Phoebe Morgan has created.  Seriously?  Is this a debut?  I had to double check as it is such a top quality psychological thriller.  There is so much tension is all relationships that I suspected everyone of tormenting Corinne.  After all who would have access to the old doll house?  We are also shown glimpses into a story from the past, but whose story is it?

I read most of The Doll House covered in goosebumps and if that's not a sure sign of a five star book, I don't know what is!  A highly recommended read - it will definitely get under your skin, play with your mind and creep you out.