If She Did It - Jessica Treadway 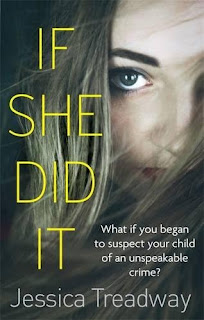 What if you began to suspect your child of an unspeakable crime?

One night changed everything. A father murdered in his bed. A mother beaten almost to death. A daughter who claims she knew nothing about her boyfriend's murderous plans. But is she telling the truth?

Hanna can't remember the details of what happened that traumatic night, she barely survived the brutal assault that left her a widow. However, if she is to keep her husband's killer in jail, she knows she has to try. But Hanna hadn't realised that those memories may cause her to question everything she thought she knew about her daughter...


If She Did It is quite a quick read as you can't wait to find out what really happened on the night that Hanna's husband Joe was killed and Hanna was left for dead.  All the evidence points to Rud Petty, the boyfriend of Hanna's youngest daughter, Dawn, and Rud was convicted of the crime but the question on everyone's lips is how involved was Dawn?  Now that Rud has launched an appeal, with Hanna still unable to remember, there's every chance that Rud will be released.  Is he guilty or innocent?

A mother's natural instinct is to protect her daughter so perhaps Dawn was there that night (as it seems like EVERYONE thinks) and Hanna's brain is protecting her by not remembering something she doesn't want to know.  Dawn hasn't exactly had an easy life: cursed with a lazy eye she struggled to fit in at school and didn't even seem to fit into her own family.  Some of the things Dawn said as a child really pulled at my heartstrings as she seemed to identify herself as an outsider.  Hanna's life also hasn't been the bed of roses we are led to believe at the beginning, she has been nurturing a seed of guilt that has ended up sprouting into an overgrown weed.  Jessica Treadway really puts the Schutt family under the microscope as the reader gathers all the evidence and becomes judge and jury.

Great characters, although none that I actually liked, and a steady plot made this a slow-burning page turner; once you start it you can't read fast enough to find out If She Did It.