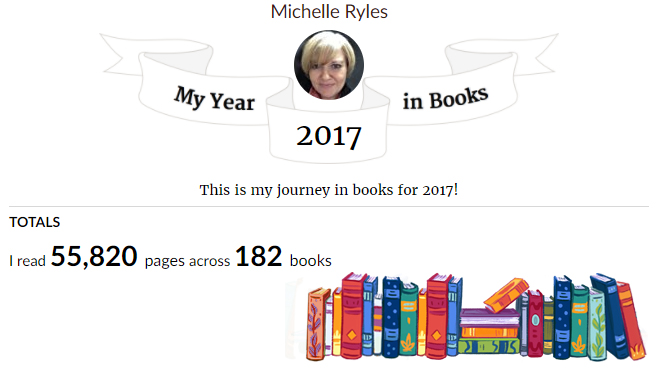 It's been another cracking year of reading for me with 182 books read and all of such high quality that this could quite easily have been a top 40.  I found it even more difficult to pick 20 top books this year as the standard has been so high, and LJ Ross took up 3 spots by releasing 3 brilliant books in 2017 and I couldn't leave any of them out.

After many hours of deliberation, you can see my top 20 of 2017 below in no particular order.

Click on any image to (hopefully) go to my review with Amazon links for you to purchase any copies for yourself - I heartily recommend that you don't miss a single one of these books. 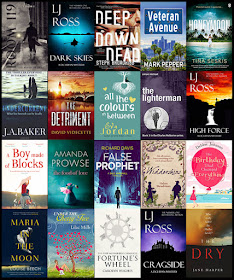 High Force, Cragside and the stunning Dark Skies by LJ Ross are all guaranteed a spot in my best books of 2017.  It wouldn't be a Top 20 without an LJ Ross book in there and with the books coming so thick and fast, they'll be taking over the Top 20 before you know it!  The DCI Ryan series is a firm favourite of mine and if you haven't discovered it yet I urge you to do so right now!

All The Colours In Between by Eva Jordan - I was so looking forward to the sequel to the absolutely hilarious debut 183 Times A Year and Eva Jordan did not disappoint.  As much as I didn't want the story to end, I was delighted to see 'To Be Continued' at the end, giving us something to look forward to in 2018.

The Lighterman by Simon Michael – The Charles Holborne series is another firm favourite of mine.  This third instalment had me on the edge of my seat as Charles Holborne is sucked further into the seedy underbelly of London and into the cross hairs of The Krays.

The Food of Love by Amanda Prowse - Amanda Prowse is well known for writing emotional books straight from the heart and this one had me in floods of tears.  It is so beautifully written that the emotion positively flowed from the page and out of my eyes.  A stunning book that I will never forget.

The Detriment by David Videcette - he can't tell us the truth but he can tell us a story.  David Videcette made my jaw drop again in this brilliant sequel to The Theseus Paradox.

The Birthday That Changed Everything by Debbie Johnson - this was the most hilarious book I have ever read so it deserves a mention in my top books of 2017.  I mistook it as a bit of romantic chicklit from the cover but I have never laughed so much - it's the perfect feel good pick-me-up book.

Maria in the Moon by Louise Beech - Louise Beech is a stunning writer and I was left completely thunderstuck and speechless after reading this exquisite piece of fiction.

The Honeymoon by Tina Seskis - the shock of the year award goes to Tina Seskis for her stomach clenchingly brilliant book.  This one is a must read for psychological thriller fans.

It has been an excellent year for debut fiction with no less than 10 debut authors making it into my Top 20:

Room 119 - The Whitby Trader by T.F. Lince – this is a book I am very excited about and I was honoured to be one of the first to read it.  I loved the whole storyline which I found emotional and thought-provoking; I think we'll be hearing a lot about this book in 2018.

Widdershins by Helen Steadman – one of my most recommended books last year, this is an immersive and compelling debut based on the actual events of the Newcastle witch trials.  It was so good I almost forgot to drink my cup of tea!

The Dry by Jane Harper – a breathtaking, outstanding and mesmeric debut that left me thirsty for more (groans ha ha).

A Boy Made of Blocks by Keith Stuart – a magnificent, flawless and breathtaking story that had me in floods of happy tears yet unable to put the book down.

Undercurrent by J.A. Baker – an absolutely scorching twisty debut that made me question everything I had read.

Deep Down Dead by Steph Broadribb – a fabulous fast-paced thriller that kept me on the edge of my seat and wouldn't let me put the book down.

Under The Cherry Tree by Lilac Mills – both heartwarming and heartbreaking, you'll laugh and you'll cry at this book which is practically perfect in every way

False Prophet by Richard Davis – a stonking fast-paced thriller, you'd better buckle up for this rollercoaster of a read.

Fortune's Wheel by Carolyn Hughes - intriguing, fascinating and surprisingly emotional historical fiction set during the time of the Black Death.

Veteran Avenue by Mark Pepper – a brilliant, thought-provoking novel that will stay with you long after turning the final page.

With very best wishes for a happy, healthy and book-filled 2018