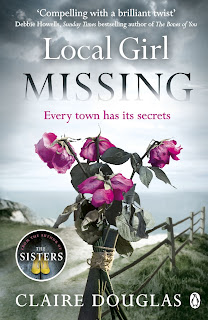 Twenty years ago
21-year-old Sophie Collier vanishes one night.
She leaves nothing behind but a trainer on the old pier -
and a hole in the heart of her best friend Francesca.
Now
A body's been found.
And Francesca's drawn back to the seaside town she's tried to forget.
Perhaps the truth of what happened to Sophie will finally come out.
Yet Francesca is beginning to wish she hadn't returned.
Everywhere she turns are ghosts from her past.
The same old faces and familiar haunts of her youth.
But if someone knows what really happened to Sophie that night then now's the time to find out - isn't it?
Except sometimes discovering the truth can cost you everything you hold dear - your family, your sanity and even your life . . .


Told from two different points of view, Local Girl Missing is one of those intriguing books filled with secrets that you just can't wait to unearth.  Along with the fast pace, I loved the two different voices of the story; that of Frankie returning to her hometown when a body has been found and the voice of Sophie who went missing twenty years ago.  Will the truth about Sophie's disappearance be revealed at last?

Frankie and Sophie were friends but, like all friendships, had their ups and downs with Frankie often appearing possessive and jealous of Sophie.  The girls may not have always got along but a secret binds them together as they are the only people who know what really happened when a local boy fell off the pier.  History repeats itself when the same thing appears to happen to Sophie, but without a body nobody is certain what really happened to her.  It is only twenty years later that a body is found and Sophie's brother, Daniel, asks Frankie to return home to identify the body with him.  Frankie is haunted by visions of Sophie and other strange things keep happening to her.  Somebody is watching and playing with Frankie's mind...

This was quite a tense story, my tension often exacerbated by the many ghostly goose-bumpy feelings I experienced.  It is filled with small town secrets and Frankie's return seems to have made them bubble to the surface and burst with catastrophic consequences.  Frankie and Sophie had quite a toxic friendship and the flashbacks to the past made it interesting to see the dynamic between these so-called friends.

Although I didn't really empathise with any of the characters, despite disturbing events in their past,  I found the quality of the writing to be excellent.  It was so atmospheric that I felt chilled to my bones and could almost taste the tang of the salty sea air on my lips.  I'll definitely be looking our for any new books by Claire Douglas and I'll make sure to add her debut, The Sisters, to my reading list.