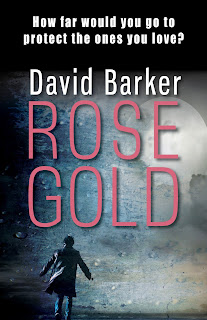 Rose Gold is the thrilling sequel to the bestselling Blue Gold.

In the aftermath of a world war for water, geopolitical tensions remain high and terrorism is a daily fact of life in the 2030s. But a mining base on the moon offers a rare example of international co-operation and a possible solution to the world's energy problems. Yet not everyone on Earth is keen for this endeavour to succeed...

Sim Atkins and his wife are desperate to start a family. But a shocking message from the moon base tells Sim that he is already a father and that his son's life is in danger. The mining station is full of suspects and, worse, the woman who fathered his child. Can Sim rescue his son and save his marriage?

Gopal and Rabten - the Gurkha and monk who helped Sim on his last assignment - are on the trail of terrorists and a giant airship. What the agents discover in the cargo hold makes Sim's mission even more vital. When they get trapped, Freda Brightwell - Sim's old partner in Overseas Division - is called out of retirement for one more mission.

Once again, corporate greed threatens the lives of millions. Overseas Division s finest are back at the sharp end. And this time, the stakes are far more personal.


I'm not a fan of science fiction but David Barker's novels intrigue me as he has one foot in the sci-fi genre and one foot in the thriller genre, making Rose Gold a completely believable futuristic thriller.  Where Blue Gold was a story about a world war for water, Rose Gold is a thriller set on the moon where minerals are mined.

As with many books in a series, you could read Rose Gold as a standalone but it would be much better to read Blue Gold first to understand the dynamic of the characters.  In Rose Gold, it's the year 2034 and Sim is married to Rosie but there's a strain on their marriage when they struggle to have children.  To make matters worse, Sim is called up to investigate a murder on the moon and finds out he has a son on the moon base.  Sim doesn't think twice about accepting this mission to go to the moon, not only to save the earth but to protect the son he didn't know he had.

The danger levels are really ramped up when a thriller is set on the moon; not only are you looking for a killer but one false move and your oxygen supply can be cut off.  Breathing is something we take for granted; it's our invisible necessity that we have in abundant supply.  Thanks to the thrilling writing of David Barker, I can imagine the panic when you're in an environment that isn't oxygen-rich and you rely on other sources of oxygen.  One little nick in your space suit and you're dead.  Yikes!

I have to give a special mention to the printed pages in the book.  Each of the three parts of the book are separated by pure black pages with a stage of the moon printed on it and every single page is printed with a watermark of the moon.  I love little touches like this; it makes a book special and unique.  Full marks to independent publisher, Urbane Publications, for this extra-special touch.

It's really something when I enjoy a book that isn't in my preferred genre and I'm delighted to say that Rose Gold is another great (not too distant) futuristic thriller from David Barker.  It's completely believable set not too far in the future with strong lead characters (although I would have liked a bit more Freda, but I suspect she'll have a bigger part to play in White Gold, the final part of the trilogy).  For me, Sim Atkins is a cross between Jack Bauer and Flash Gordon with only 48 hours to save the earth in this high octane thriller.  If you're looking for something different to read, you might just have found it in Rose Gold. 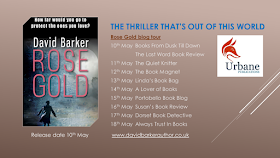