BLOG BLITZ: Not Having It All - Jennie Ensor 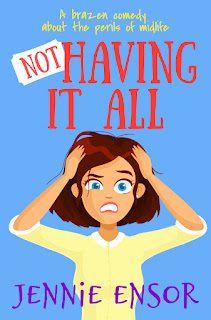 Neuroscientist Bea Hudson fears she is a bad mother and that her career will be thwarted by family life. When her husband suspects Bea of having an affair with her best friend, a chain of events is triggered, leading to a crisis in Bea’s life.

Bea Hudson, a neuropsychologist living in Godalming, is struggling to cope with the challenging behaviour of her obsessive husband Kurt and their disruptive four-year-old daughter Fran. On top of this, her boss is pressuring her to get results from her research. Bea has her work cut out.

Things come to a head when Kurt goes away on an extended business assignment. While sacking staff and drinking heavily, Kurt’s insecurities run amok and he becomes convinced that Bea’s close friend Madeleine is seducing his wife and unduly influencing his daughter.

Meanwhile, childless artist Madeleine sees her friend torn between the demands of work and offers to help with Fran. But when she reveals a startling desire to her unsympathetic therapist Mr Rowley, he advises her to focus on the attention of Colin, a man she met in a lift.

Can Bea survive the demands of her career and the turmoil in her marriage without having a breakdown? Can Madeleine survive Kurt’s anger and find happiness with Colin? And can love survive marriage, middle-age, alcohol and ambition?

Not Having It All is about a scientist torn between her stalling career and the demands of her family. With themes of trust, deception and obsession, it is a mercilessly playful take on modern friendships, relationships and family life.


I have been a fan of Jennie Ensor's books since I read her stunning debut, Blind Side, so I was very excited to read Not Having It All.  This is very different to Jennie Ensor's other books but it really shows the depth of talent that Jennie has.

The format of the book is very unusual comprised of emails, letters, journal entries and texts, but the variety really held my interest.  It rather feels as if you are spying on the characters as you become privy to their innermost thoughts and fears.  This all helps to create well rounded characters that I really felt as if I got to know over the course of the book.

There is a lot of humour woven into the pages of Not Having It All; I frequently laughed out loud, mainly at Katie's journal as she looked after four year old Fran, aka Little Fiend.  I also found Kurt's escalating paranoia totally hilarious as his imagination ran wild and he took completely over the top steps to keep an eye on things at home while he worked away.

Although Bea is the main character, she has a stunning supporting cast in addition to those I've already mentioned.  There's Bea's friend, Maddie who is mad by name and mad by nature, Maddie's new man Colin, who is sick of denying pet insurance claims as well as Maddie's therapist, Nigel, who seems to get some reverse therapy from Maddie and Bea & Kurt's next-door neighbour, Adrian, who Kurt enlists for operation Get Rid of Madeleine.

There is so much going on that you can't help but race through the book; Not Having It All is highly entertaining and completely action packed.  It is literally laugh out loud hilarious at times and I read most of the book with a smile on my face; a fabulous bit of feel-good fiction from Jennie Ensor. 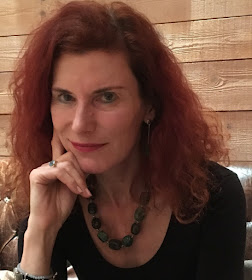 Jennie Ensor lives in London and has Irish roots. During a long trip overseas she obtained a Masters in Journalism and began her writing career as a journalist, covering topics from forced marriages to accidents in the mining industry. Her debut novel BLIND SIDE was published by Unbound in 2016. In January 2018 her short story ‘The Gift’ was placed in the Top 40 of the Words and Women national prose competition. Her poetry has appeared in many UK and overseas publications, most recently Ink Sweat and Tears. She sings in a chamber choir. 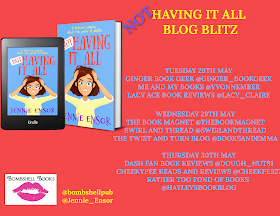