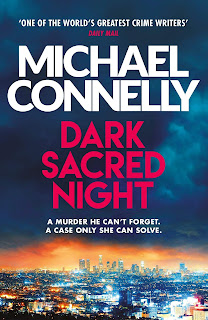 A MURDER HE CAN'T FORGET.

A CASE ONLY SHE CAN SOLVE.

Daisy Clayton's killer was never caught. In over ten years, there has been no breakthrough in her murder case.

Detective Renée Ballard has faced everything the LAPD's notorious dusk-till-dawn graveyard shift has thrown at her. But, until tonight, she'd never met Harry Bosch - an ex-homicide detective consumed by this case.
Soon, she too will become obsessed by the murder of Daisy Clayton.
Because Ballard and Bosch both know: every murder tells a story. And Daisy's case file reads like the first chapter in an untold tragedy that is still being written - one that could end with Ballard herself, if she cannot bring the truth to light...


I love the Harry Bosch novels, although I'm way behind in the series, but that didn't stop me getting super excited to get my hands on an advance copy of Dark Sacred Night, Harry Bosch book 21.  Yes number 21!!!  Far from feeling daunted that I have so much catching up to do, reading Dark Sacred Night has reawakened my desire, or rather need, to read more Bosch!


This is actually the first Bosch book that I've read since watching, and getting hooked by, the tv show starring perfectly cast Titus Welliver as Harry Bosch.  I think because of the show, I could visualise the scenery and characters much easier and so I found myself racing through the book at a rapid rate of knots.  There are a lot of characters in Dark Sacred Night but strangely I didn't feel overwhelmed by them; I think I was so engrossed in the story that I didn't have time to dwell on who was who.

This is the second book starring Detective Renée Ballard (the first being The Late Show) but it's the first book where she encounters Harry Bosch.  When they first meet, I really felt as if Harry had met his match this time as nothing gets past Ballard; she is as sharp as a tack.  I think once she's made up her mind, it's hard to change it but in this case her initial suspicion of Bosch eventually changes into trust and respect.  I think Bosch may have met a kindred spirit in Ballard, although one that is only prepared to bend the rules not break them, so working with Ballard might keep Bosch out of trouble for once!  Trouble seems to follow Bosch around so I'll believe that when I see it, of course!  I'm really looking forward to see what Michael Connelly has in store next for this new pairing of Ballard and Bosch.

As for the story in the book; it's Michael Connelly so it's high-octane crime writing at its very best - that's all you need to know before you rush out and buy the book, which I highly recommend you do.  Dark Sacred Night is fast-paced, thrilling, compelling and totally faultless; everyone needs to read more Bosch! 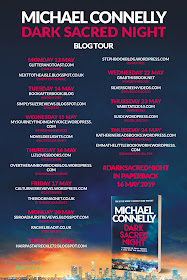