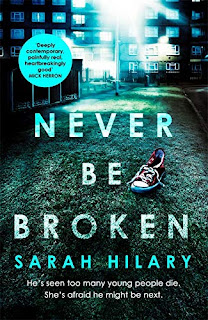 Children are dying on London's streets. Frankie Reece, stabbed through the heart, outside a corner shop. Others recruited from care homes, picked up and exploited; passed like gifts between gangs. They are London's lost.

Then Raphaela Belsham is killed. She's thirteen years old, her father is a man of influence, from a smart part of town. And she's white. Suddenly, the establishment is taking notice.

DS Noah Jake is determined to handle Raphaela's case and Frankie's too. But he's facing his own turmoil, and it's becoming an obsession. DI Marnie Rome is worried, and she needs Noah on side. Because more children are disappearing, more are being killed by the day and the swelling tide of violence needs to be stemmed before it's too late.

NEVER BE BROKEN is a stunning, intelligent and gripping novel which explores how the act of witness alters us, and reveals what lies beneath the veneer of a glittering city.


I jumped into the DI Marnie Rome series at book 5 (Come and Find Me) and although I planned to read the earlier books to fill in a bit more the backstory, my TBR pile had other ideas and I haven't managed to read them yet.  Sarah Hilary very kindly allows for readers picking up her books mid-series as she gives enough information about the characters so you don't feel disadvantaged by not having read the whole series.

Never Be Broken is so scarily realistic that it gave me goosebumps whilst reading it and again now when I'm just thinking about the story.  It seems like not a day goes by when there isn't a stabbing or shooting on the news, particularly in London.  Building a story around these horrific crimes really highlighted the effect that such devastating events have on the affected families and community.

DI Marnie Rome is such a strong established character that Sarah Hilary is confident enough to let Marnie take more of a back seat in Never Be Broken as DS Noah Jake's story comes to the fore.  Both detectives have heartbreaking backstories but putting the spotlight on Noah kept me absolutely riveted.  I mean there's a gripping, gritty and devastating story going on already so adding this extra layer of bringing the characters to life ensured that I remained glued to the page.

I don't know whether Sarah Hilary intended it, but I did pick up a South Park reference which made me smile.  My standard answer to 'how are you?' is always 'I'm super, thanks for asking' so it did make me chuckle when Noah said the same thing.  There's also a reference to Brexit which makes it a very current and realistic story as you'd have to live under a rock to avoid hearing or seeing something about Brexit these days.  I'm not a fan of politics at all but I was rather surprised that one of the characters mentioned that there is a 'right way' to vote.  I thought putting an X in the box of your choice was the right way; I do hope I haven't been voting the wrong way all of these years!  It's always good to have different opinions, so I do love little things like this in books that become discussion points with family and friends when you inevitably turn the conversation around to books you've read.

Never Be Broken is an excellent addition to the DI Marnie Rome series; it's so true to life that it is difficult to read at times but there's no hiding behind the sofa in real life so it's nigh on impossible to remove your eyes from the pages of this disturbing but scarily realistic and compelling book.  I'm looking forward to many more books in this amazing series; if you love crime, you'll love DI Marnie Rome.

Buy it from Hive to support your local indie bookshop

Sarah Hilary’s debut, Someone Else’s Skin, won Theakstons Crime Novel of the Year 2015 and was a World Book Night selection for 2016.  The Observer’s Book of the Month (‘superbly disturbing’) and a Richard & Judy Book Club bestseller, it has been published worldwide. No Other Darkness, the second in the series was shortlisted for a Barry Award in the US.  Her DI Marnie Rome series continued with Tastes Like Fear, Quieter Than Killing and Come And Find Me. 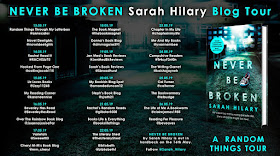