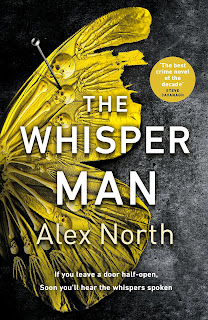 If you leave the door half open,
you will hear the whispers spoken...


Still devastated after the loss of his wife, Tom Kennedy and his young son Jake move to the sleepy village of Featherbank, looking for a fresh start.

But Featherbank has a dark past. Fifteen years ago a twisted serial killer abducted and murdered five young boys. Until he was finally caught, the killer was known as ‘The Whisper Man’.

Of course, an old crime need not trouble Tom and Jake as they try to settle in to their new home. Except that now another young boy has gone missing, stirring up rumours that the original killer was always known to have an accomplice. And then Jake begins acting strangely.

He says he hears a whispering at his window...


I usually write notes as I'm reading books but I ended up with a blank page whilst reading The Whisper Man because to write notes would have meant that I had to tear my eyes away from the page and I was completely incapable of doing so.  The prologue is a letter to Jake from his father, Tom, about what happened in Featherbank...like a hungry fish I gulped at this tasty worm on a hook - I just had to know what happened in the innocently named town of Featherbank.

I read The Whisper Man in one day and felt rather aggrieved that I had to put it down to do such tiresome tasks as eat and use the facilities, so there was no way I was putting it down to go to sleep.  Everything is completely perfect about this book; the storyline, the characters, the setting and the pacing.  I was as scared as I was intrigued and I knew it was a good book when I experienced my Cinderella emotion of not wanting it to finish yet simultaneously needing to find out what happens at the end.

Jake completely stole my heart in this book; he is grieving for his mother, Rebecca, and has imaginary friends which help him to cope.  Tom, as a single father is naturally disturbed by this, especially when he hears one of the imaginary friends talk back.  The hairs on the back of my neck stood on end several times whilst reading this book; it's scarily creepy in addition to being a disturbing story about missing children over several years.  As the layers are peeled away we eventually unearth the rotten black heart of Featherbank, so put on your speed reading glasses to find out the truth!

I was pretty creeped out a lot of the time at the whispering at the windows and I totally blame sneaking a peek at Salem's Lot on TV when I was an impressionable 4 year old.  I still can't sleep with a crack in the curtains so the thought of a monster at the window literally covered me in goosebumps every time it was mentioned.  It's giving me goosebumps just thinking about something at the window and even though the special effects of the 70's are pretty non-existent I'm actually creeping myself out with the below image.

A lot of books these days are cleverly marketed and labelled 'the best', 'the biggest', 'the most disturbing' or 'the most gripping' but in the case of The Whisper Man you can definitely BELIEVE THE HYPE!  This book is AMAZING!  It is the most chilling, disturbing and scarily creepy crime novel I have ever read.  If you only read one book this year, make it The Whisper Man - you won't regret reading it but you'll definitely regret missing it.

I'm not in the least surprised to learn that The Whisper Man has been snapped up by Hollywood and I can't wait to see it on the big screen, even though it might creep me out more than Salem's Lot did 40 years earlier.  Bring on the creepfest! 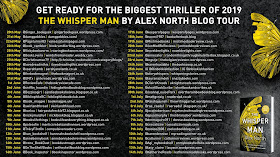