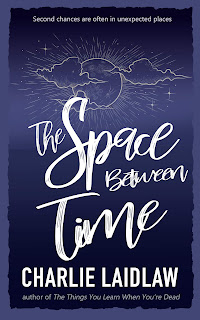 Emma Maria Rossini’s perfect life begins to splinter when her celebrity father becomes more distant, and her mother dies suspiciously during a lightning storm. This death has a massive effect on Emma, but after stumbling through university, she settles into work as a journalist in Edinburgh.

Her past, however, cannot be escaped. Her mental health becomes unstable. But while recovering in a mental institution, Emma begins to write a memoir to help come to terms with the unravelling of her life.

She finds ultimate solace in her once-derided grandfather’s Theorem on the universe – which offers the metaphor that we are all connected, even to those we have loved and not quite lost.


Wow, Charlie Laidlaw...you have just blown me away!  I read and enjoyed Charlie Laidlaw's The Things We Learn When We're Dead so I didn't hesitate when a chance came up to take part in the blog tour for his new novel, The Space Between Time.  I expected a slightly quirky novel but I was completely unprepared for the emotional and thought-provoking journey I was about to embark with Emma Maria Rossini.

It's a difficult book to review without giving away any spoilers but it's fair to say that Emma doesn't have a conventional childhood; with her father spending more and more time away from home as his acting career takes off, she is pretty much being brought up in a single parent family.  Paul's absence causes a huge strain on the family and Emma's mother is convinced that Paul is having an affair with every leading lady with whom he comes into contact.  Nothing is hidden from Emma and like a sponge she soaks up all the damning evidence and the cracks begin to appear in her relationship with her father.  As with any story, there are always two sides but it is many years later before Emma gets to see the full picture.

Like her father changed his name to Paul Ross to lose the Italian link, Emma in reverse dropped the 'Emma' and became Maria Rossini.  I really felt her struggle as she tried to reinvent herself as a new person, but ultimately she is the same person underneath whatever she decides to call herself.  As her mental health becomes increasingly unstable, she is encouraged to write a journal to help her find the root of her problems and finally make peace with who she is.  I loved reading Emma's journey; it's poignant, witty, heartfelt and thought-provoking.  Charlie Laidlaw has given Emma a beautiful voice and it really makes you think about what people hide behind their smiles.


The Space Between Time is as beautiful as it is tragic; as uplifting as it is heartbreaking and simply breathtaking in its uniqueness.  A highly recommended read. 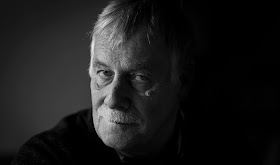 Charlie Laidlaw was born in Paisley and is a graduate of the University of Edinburgh. He has been a national newspaper journalist and worked in defence intelligence. He now runs his own marketing consultancy in East Lothian. He is married with two grown-up children. 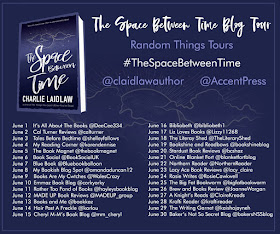