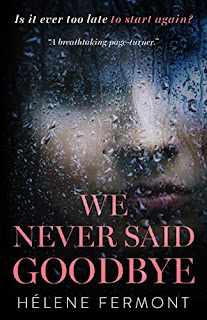 Is it ever too late for love?
When Mike dumps Louise on their 20th Wedding Anniversary, her entire world comes to an end.


Devastated and confused, she attempts to make sense of what happened and returns to a city she's avoided for two decades.

Will she be able to move on with the man she left behind or will Mike's increasingly violent and unhinged behaviour continue to haunt and ruin her life? When the reason Mike left her at long last is revealed Louise's life is in serious danger.


I love Hélene Fermont books so I was delighted to be offered a spot on the blog tour for We Never Said Goodbye.  All of Hélene's books have recently had a makeover and I think that the new cover perfectly captures the heartbreaking, lonesome theme of the book.


Louise is all set to celebrate her 20th wedding anniversary, the only thing that is missing is her husband, Mike.  Mike has chosen this day of all days to tell Louise that their marriage is over and he is leaving her.  Louise is naturally devastated and I was absolutely furious on her behalf.  What an absolute toerag!  If Mike could do that to Louise on their wedding anniversary, then she's definitely better off without him and karma is indeed a bitch so Mike had better be prepared to reap what he sows!

We follow Louise's story as she picks up the pieces of her shattered life, with the help of her close friends and her Aunt in Sweden.  We also get to keep an eye on what Mike is up to and, as annoying as it is to see him selfishly living his life post-Louise, I kept hoping that he would get his comeuppance in the end.  You can only trample on people so many times before they will turn on you and hit back.  With so many people having Mike's boot print on their skin, any one of them could fight back at any time.

Although I don't think this is one of Hélene's best books, I really liked the underlying message of the scale of prejudice and bigotry and I have to share a quote from the book that really resonated with me:

Bigotry comes in many disguises.  Prejudice will prevail.

It's up to us to not let prejudice prevail so let's be kind and thoughtful to one another, whatever sex, skin colour, religion or other characteristic defines the individual.  We are all unique and special so let's embrace these differences and live harmoniously together.

Hélene Fermont writes character-driven psychological crime fiction with a Scandi Noir flavour. Known for her explosive, pacy narrative and storylines, she has published three novels – Because of You, We Never Said Goodbye and His Guilty Secret – and two short story collections – The Love of Her Life and Who’s Sorry Now? Her fourth novel is due for release in the summer of 2019. After 20 years in London, Hélene recently returned to her native Sweden where she finds the unspoiled scenery and tranquillity a therapeutic boost for creativity. Enjoying a successful career as a Psychologist, when she’s not working her ‘day job’, Hélene spends her time writing, with friends and family, or playing with her beloved cat, Teddy. All three novels can be purchased via her website helenefermont.com/books/ 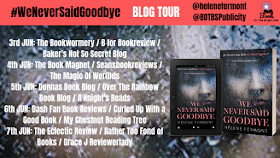