BLOG TOUR: The Name Beneath The Stone - Robert Newcome 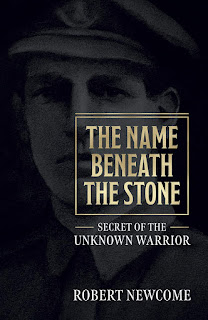 Three generations, one family, connected by an historic secret.

1917 - Private Daniel Dawkins fights at Messines Ridge and Passchendaele. He writes home to his true-love Joyce, but reveals little of his extreme bravery, his kindness, his loyalty to his comrades and the horrors they experience on the Western Front.

1920 - Captain Peter Harding is tasked with a secret mission to assist in the selection of a body dug up from the battlefields of Flanders to be buried in Westminster Abbey as the 'Unknown Warrior'. Events take place on that expedition that come to haunt him for the rest of his life.

2011-Sarah Harding discovers Daniel s letters and Peter s diaries. Together with historian James Marchant she pieces together the hidden truth behind the Tomb of the Unknown Warrior and must decide what to do with it. Values are challenged and characters are tested in this gripping novel which asks what if the identity of the Unknown Soldier was discovered - and should that secret ever be revealed?


Oh my word, I am speechless.  What can I say about this outstanding book that would do it justice?  My paltry words will never be able to describe how simply breathtaking this book is.  Well as Yoda said, "Do or do not, there is not try" so here goes!

I knew of the Tomb of The Unknown Warrior in Westminster Abbey, but knew nothing of the story as to how it came to be.  The inspiration behind the idea and the inconceivable task of having to locate an unidentifiable body from the Western Front are explored in The Name Beneath The Stone.  As this is a fictional story based on fact, Robert Newcome adds an emotional story of the young men who were sent to war in 1914, many never to return.

The mystery of The Unknown Soldier caught the hearts of the nation in 1920 when an unidentified body was brought from France and laid to rest in Westminster Abbey.  Many grieving families imagined it was their son being laid to rest and in this way the soldier belonged to the whole country,  The tomb is so revered that it is the only floor tomb in Westminster Abbey to have never been stepped upon and in an act of deference royal brides follow the Queen Mother's tradition of having their bridal bouquets placed on the tomb.

Now imagine if the identity of The Unknown Soldier was revealed; the mystery would be obliterated and the whole point of the interment ruined.  The establishment will do anything to keep this secret hidden if anyone ever does provide proof of the soldier's identity.  It is on her father's deathbed that Sarah Harding hears the words 'Unknown Soldier' whispered and, with the help of an historian, begins to unravel the mystery of her ancestors.

The story of Daniel Dawkins and his sweetheart Joyce is heart-wrenching.  More so because it is a story that would have been replicated thousands of times over during the course of the First World War.  The casualties from going over the top in an attempt to push the Germans back were enormous.  Whole platoons were wiped out in seconds and I struggled to contain my emotions thinking about this devastating loss caused by war.

I had goosebumps from the end of Chapter One right the way through the book as Robert Newcome brings to life all of the known and unknown soldiers who died during the Great War.  The story is moving and poignant, never more so than when I was reading it on Remembrance Sunday.

This breathtaking book is an absolute must read, I really can't recommend The Name Beneath The Stone highly enough; I'd give it 888,246 stars if I could, one for every military fatality of World War I.  Every once in a while a book comes along that renders me speechless and The Name Beneath The Stone did just that.  Stunning and imaginative, it took my breath away.  Absolutely outstanding and perfect in every way; this is a book I will be recommending for many years to come. 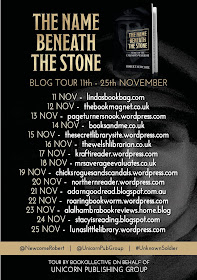