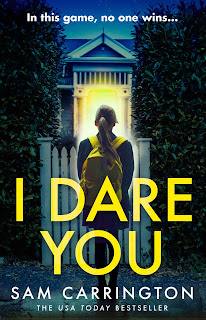 AN INNOCENT GAME. A SHOCKING CRIME. A COMMUNITY FULL OF SECRETS.

Two little girls were out playing a game of dares. Only one returned home.

The ten-year-old told police what she saw: village loner Bill ‘Creepy’ Cawley dragged her friend into his truck and disappeared.

No body was found, but her testimony sent Cawley to prison for murder. An open and shut case, the right man behind bars.

The village could sleep safe once again.

Anna thought she had left Mapledon and her nightmares behind but a distraught phone call brings her back to face her past.

Now he’s out of prison and looking for revenge. The question is, who will he start with?


What a firecracker of a thriller Sam Carrington his written with her new novel, I Dare You; it's creepy, fast-paced and bursting to the brim with secrets.  The characters are so well developed that I detested some and felt complete empathy for others.  The whole story is so multi-layered it's like peeling an onion with a secret at its core that will bring tears to the eyes of one of the characters.

I got so angry with the characters when I was reading I Dare You because the children of Mapledon are obsessed with playing Knock, Knock, Ginger on the Cawley house.  The children's obsession with the creepy Cawley house reminded me of the spooky Radley Place in To Kill a Mockingbird.  What even makes a house creepy?  Why do children feel drawn to something that scares them so much?  In the case of I Dare You, the children have picked up on the bullying of Bill Cawley by their parents.  There's more than one bad apple in Mapledon and they don't want Bill Cawley in their poisonous village.  The women of the village get together like witches around a cauldron to hatch a plan to get rid of Bill Cawley once and for all.  The lengths they are prepared to go to oust him from their midst is quite shocking and it really ignited my fury at the complete injustice of it all.

The children's game goes badly wrong one day when one little girl doesn't return home and no body is found.  On the 30th anniversary of Jonie Hayes' disappearance, two women return to the village they once called home; Anna returns after a disturbing phone call from her mother that provides the creepy element of the story but journalist Lizzie's return is a little more mysterious as she hides her true identity whilst asking questions about the past, providing an abundance of intrigue and suspense.    I don't want to say anything more about the plot as to do so would spoil the peeling of the onion for other readers.  Suffice to say, Sam Carrington keeps the reader on their toes as each layer unravels to reveal even more deeply buried layers underneath.

More gripping than a strip of velco, you won't be able to put down I Dare You until all its secrets are revealed.  It's a blistering, suspenseful thriller that got under my skin and made me so furious but I loved every page of it. 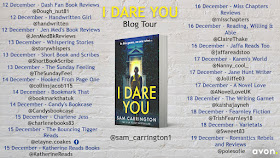 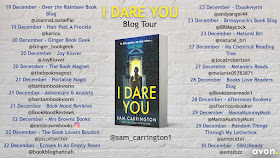