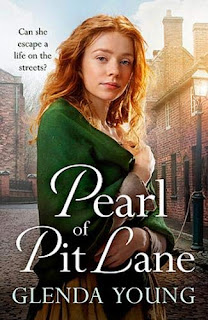 When her mother dies in childbirth, Pearl Edwards is left in the care of her aunt, Annie Grafton. Annie loves Pearl like her own daughter but it isn't easy to keep a roof over their heads and food on the table. Annie knows the best way to supplement their meagre income is to walk the pit lane at night, looking for men willing to pay for her company.

As Pearl grows older she is unable to remain ignorant of Annie's profession, despite her aunt's attempts to shield her. But when Pearl finds herself unexpectedly without work and their landlord raises the rent, it becomes clear they have few choices left and Annie is forced to ask Pearl the unthinkable.

Rather than submit to life on the pit lane, Pearl runs away. She has nothing and nowhere to go, but Pearl is determined to survive on her own terms...


I have to be honest and say that I was a bit nervous about reading Pearl of Pit Lane as I don't usually read sagas but I am so glad that I made an exception for Glenda Young.  I clapped my hands with glee when I opened the book and found a map of Ryhope in 1919 (the setting of the book); I do love maps in a book as they really help to bring the story to life.  I enjoyed Pearl of Pit Lane so much more than I expected and Pearl's story is so compelling that I found myself reading just one more chapter until I'd devoured every single page.


I'm from the North East so I was brought up reading Catherine Cookson books and it's inevitable that any sagas based in the North East will be compared to Dame Catherine's famous novels.  So it is praise indeed to say that Pearl of Pit Lane would definitely come top of my Catherine Cookson chart any day.  Through her vivacious and descriptive writing, Glenda Young has an amazing ability to bring her characters and scenery to life and breathes new life into the tired and dusty saga genre.

Pearl is such a brilliant character with an outstanding story; brought up by her Aunt Annie in the shadow of the local colliery and living in squalor, the pair don't have two pennies to rub together.  Annie's meagre income in the shop they live above doesn't even pay the rent so she is forced to sell herself on the street.  When Annie's debts mount up, she can only see one way out of the hole she finds herself in and that's for Pearl to walk the streets with her.  Pearl is such a strong, steely character that she runs away to the village in search of work rather than follow in her Aunt's footsteps and her story just gets better and better from there, although I'm not saying any more about the plot.

Surrounding Pearl are some tremendous characters; I've already mentioned her Aunt Annie but there's also her friend Joey, Reverend Daye the benevolent vicar, Jackson the local bad guy who keeps crossing paths with Pearl, Jim the grocer who takes a chance on Pearl despite the protestations of his wicked witch of the west wife Renee, and last but by no means least Boot the dog who stays by Pearl's side watching out for her.  Such a colourful cast of characters brought amazing depth to the story and brought the whole book to life.

Pearl of Pit Lane is an exceptional and impeccably well researched novel by Glenda Young; Glenda even joined a clippy mat workshop so she could write about Pearl's creations and I'm sure she visited a few of Ryhope's pubs, purely for research, of course!  I found Pearl of Pit Lane surprising enthralling; I'd given myself a couple of days to read it because I thought I would struggle to connect with a saga, however, I was riveted from start to finish and ended up reading it cover to cover within 24 hours.  I can't praise Pearl of Pit Lane highly enough and I would recommend it to all; it's nice to escape to the past sometimes and I loved seeing Ryhope (in Sunderland) through Glenda Young's eyes. 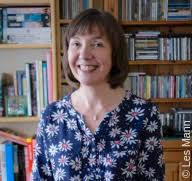 Glenda Young is a short story award-winner, her fiction is regularly published in Take a Break and My Weekly.  Glenda also writes Riverside, the first weekly soap opera for The People's Friend.  She credits her local library in the village of Ryhope, where she grew up, for giving her a love of books.  She runs two hugely popular Coronation Street fan websites which both respectively have an impressing and international following, with 20k on Facebook, 32k on Twitter and a mailing list of 4.5k. 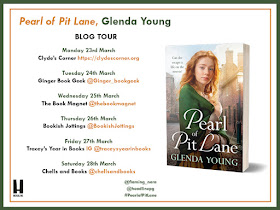