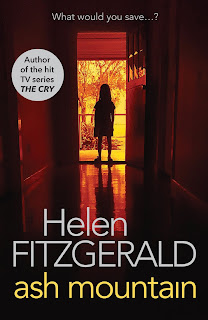 Fran hates her hometown, and she thought she’d escaped. But her father is ill, and needs care. Her relationship is over, and she hates her dead-end job in the city, anyway.


She returns home to nurse her dying father, her distant teenage daughter in tow for the weekends. There, in the sleepy town of Ash Mountain, childhood memories prick at her fragile self-esteem, she falls in love for the first time, and her demanding dad tests her patience, all in the unbearable heat of an Australian summer. As past friendships and rivalries are renewed, and new ones forged, Fran’s tumultuous home life is the least of her worries, when old crimes rear their heads and a devastating bushfire ravages the town and all of its inhabitants…

Simultaneously a warm, darkly funny portrait of small-town life – and a woman and a land in crisis – and a shocking and truly distressing account of a catastrophic event that changes things forever, Ash Mountain is a heart-breaking slice of domestic noir, and a disturbing disaster thriller that you will never forget…


For such a short book, at only 210 pages long, there's an awful lot going on in Ash Mountain.  It just shows the quality of Helen Fitzgerald's writing that she can cram so much in over so few pages.  It is written so beautifully that it feels like every single word has been carefully chosen and crafted into this deeply disturbing and haunting story.

The main character of Fran is very damaged, and it's not shown how damaged until much later in the story, but she gets on with her life thanks to her dark humour.  The way that Fran takes her Dad places had me absolutely howling with laughter at times and I have to applaud Helen Fitzgerald's genius for adding some humour to an otherwise sobering subject.

I wasn't really sure in what direction the story was going to take me as we flick back and forth in time but when past and present collide I actually had to choke back a sob.  The writing is so vivid and filled with emotion that I felt completely drained at the end of the book; I felt as devastated as the scorched earth when past crimes were laid bare.  I feel so sad just thinking of it now; even though the characters are fictional it feels so very real to me.

Ash Mountain is a horrifying, beautiful and mesmeric story of a completely devastating event; I can't stop looking at the hypnotic photo on the cover, which is a real photo from the Australian bushfires of 2019 which brings terrifying authenticity to this already vivid story.  This haunting and evocative story is not one that I will easily forget.

Helen FitzGerald is the bestselling author of ten adult and young adult thrillers, including The Donor (2011) and The Cry (2013), which was longlisted for the Theakstons Old Peculier Crime Novel of the Year, and is now a major drama for BBC1. Her 2019 dark comedy thriller Worst Case Scenario was a Book of the Year in both The Guardian and Daily Telegraph. Helen worked as a criminal justice social worker for over fifteen years. She grew up in Victoria, Australia, and now lives in Glasgow with her husband. 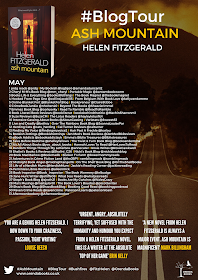