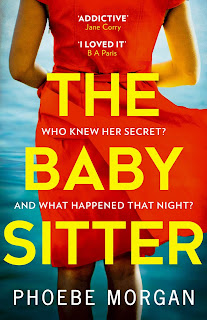 On the hottest day of the year, Caroline Harvey is found dead in Suffolk. Her body is left draped over a cot – but the baby she was looking after is missing.

Hundreds of miles away, Siobhan Dillon is on a luxurious family holiday in France when her husband, Callum, is arrested by French police on suspicion of murder.

As Siobhan’s perfect family is torn apart by the media in the nation’s frantic search for the missing baby, she desperately tries to piece together how Callum knew Caroline.

What happened that night? Was Caroline as innocent as she seemed – or was she hiding a secret of her own?


I love a book filled with secrets and The Babysitter is absolutely bursting at the seams with them.  There's a murder, a missing child and more secrets than you can shake a stick at, making this such a gripping and addictive book that you won't want to put down for a second.  I even felt like I didn't want to blink in case I missed something.

Ipswich is left reeling when Caroline Harvey is found dead in her apartment with no sign of her friend's baby who she was looking after.  The parents of the missing child give local TV executive Callum Dillon's name to the police and he becomes their prime suspect.  Callum is on holiday in France with his family when the police turn up to arrest him and take him back to Ipswich for questioning.  Everything points to Callum murdering Caroline then calmly jetting off on holiday, but why did he do it and what happened to the baby?

With flashbacks to before the murder and present day, The Babysitter sets a blistering pace that ensures the reader will be turning the pages as fast as possible until all of its dark and delicious secrets are revealed.  There are some amazing heart-stopping moments that left me breathless and gasping with shock but my eyes insisted on greedily devouring every single word without giving me the chance to pause.

I love the mixed media that Phoebe Morgan has included in her story; the police interview transcripts and tweets really give an extra dimension to the story making it feel very realistic.  Weirdly, I wasn't that keen on the characters but I think that's kind of the point: Callum is completely detestable and Siobhan just likes to bury her head in the sand to avoid problems with her husband and daughter.  Caroline's story is perhaps the saddest one I have ever read and I was surprised how empathetic I felt towards her.

The Babysitter is incredibly gripping and addictive with such a clever jaw-dropping plot that you won't be able to put it down once you pick it up.  Make sure you clear your schedule and find a nice quiet place to read as you won't want to be disturbed once you start The Babysitter.