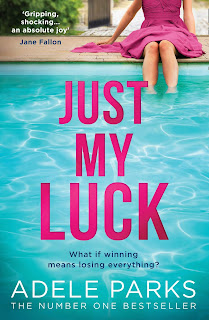 What if winning means losing everything?

It’s the stuff dreams are made of – a lottery win so big, it changes everything.

For fifteen years, Lexi and Jake have played the same six numbers with their friends, the Pearsons and the Heathcotes. Over dinner parties, fish & chip suppers and summer barbecues, they’ve discussed the important stuff – the kids, marriages, jobs and houses – and they’ve laughed off their disappointment when they failed to win anything more than a tenner.

But then, one Saturday night, the unthinkable happens. There’s a rift in the group. Someone doesn’t tell the truth. And soon after, six numbers come up which change everything forever.

Lexi and Jake have a ticket worth £18 million. And their friends are determined to claim a share of it.


I have always loved Adele Parks books and it's wonderful to see her evolving over the past 20 years from fantastic contemporary romcoms to compelling psychological thrillers.  Just My Luck is her twentieth novel and it's flipping brilliant; it's so good I couldn't put it down.

When Lexi and Jake Greenwood win the lottery it should be a dream come true but instead it turns into a nightmare; up until the previous week, the winning numbers had previously been used by a syndicate of 3 couples.  The Pearsons and Heathcotes claim that they never dropped out of the syndicate so they challenge the Greenwood's win which smashes their longstanding friendship into smithereens.

'What would you do if you won the lottery?' has to be one of the most asked questions the world over.  We always think of the positives: a new house, a sports car, paying off family mortgages and charitable donations but every positive has a negative: begging letters, security risks and seething jealousy.  Lexi and Jake couldn't be more different in light of their win: Lexi goes into work as if nothing has changed whereas Jake resigns by text and starts spending the money before they have it.  Jake really got on my nerves; not only with his incessant spending but his work ethic (or complete lack of). I'm not a parent but even his parenting rubbed me up the wrong way; I don't know how Lexi managed to stay married to him for so many years!

The story is told from the viewpoints of Lexi and her 15 year old daughter Emily as the relationships between family and friends are stretched to breaking point.  It amazes me how authors can switch between voices with their own individual characteristics and Adele Parks does this flawlessly.  The characters are so well developed that they virtually leap out of the page and their voices ring out loud and clear.

Just My Luck is an absolutely brilliant domestic thriller; it's like seeing a lovely family turn into monsters overnight when they're hit with the money bug.  As the Greenwoods find out, money definitely can't buy you happiness and it's scary what people will do to get their hands on your money.  It's made me feel glad that I don't play the lottery, that's for sure!