I'm thrilled to be taking part in the Rachel's Random Resources Blog Tour for Questions of Perspective by Daniel Maunz.  This is a very intriguing and completely unique book so scroll down to see what I thought. 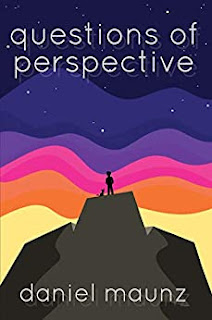 After his only friend and colleague, John Manta, disappears without a word, Dave Randall further entrenches himself in the humdrum life of an unenthusiastic lawyer. But once he begins to understand what happened, he embarks on a journey to uncover the deeper meanings and implications of John's fate.

Accompanied by Peaches the cat, Dave uproots his life and reinvents himself in the midst of his search. Along the way, he is haunted by his piecemeal understanding of John's fate and what it means for his existence. Little does Dave know, his journey of self-discovery will have ramifications that extend far beyond the borders of his own little life.


Once in a while a book comes along that could change your life and Questions of Perspective will certainly do just that.  Everyone who reads it will take something away with them and it will be different for every single person.  Even though it is fiction, and a brilliant story at that, it inadvertently comes with the added benefit of being something of a self-help or self-reflection book.

With aspirations to join the FBI, Dave studied law at university and finds himself working at a law firm in New York.  Whilst training as an attorney (and rather hilariously simultaneously developing into an asshole) he befriends one of his colleagues, John.  John is a bit of a strange character at work; the partners and his peers dislike him but the secretaries and associates get on well with him.  When John doesn't turn up for work, Dave goes to check up on him and comes away with John's cat, Peaches.  Be warned, Peaches will steal your heart as much as he steals the show.  I don't think Peaches even realises he is a cat, I'm sure he thinks he's just a really cool guy.

When Dave finally finds out what happened to John, it changes his whole life.  Dave resigns from his job, leaves New York with Peaches in tow and retrains as a teacher in a little town near Woodstock.  John's new existence leaves Dave with many questions but also with a new way to look at the world.  I've always been aware of the difference between looking and seeing, but find I'm often guilty of walking or driving on autopilot when going to familiar places.  It's certainly reminded me to make the effort to see my surroundings rather than take them for granted.

The beauty of this book is that you can take as much or as little from it as you wish.  Although it does centre around the existence of god, it's not religious so it won't offend anyone with particular beliefs.  It's naturally very thought-provoking and worthy of further discussion.  I think I'll be bringing Questions of Perspective into conversation for quite some time.

Questions of Perspective is a highly original, unique and thought-provoking book; I can't even begin to describe how awesome it is.  It's a book filled with so many messages that each individual reader will find something that resonates with them.  Questions of Perspective is a completely unforgettable, stunning and captivating debut and one I'll be recommending for a very long time.

Buy it from:
Amazon UK
Amazon US 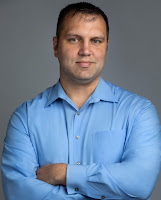 When he is not writing, Daniel Maunz works as an attorney as in-house counsel for a major insurance company. He currently lives in Sullivan’s Island, South Carolina, with his wife Lynne, their son Patrick, and their two cats: Admiral Meowy McWhiskers and Captain Cutie (or "Admiral" and "Captain" for short). Questions of Perspective is his first novel.