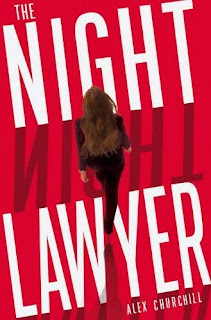 Sophie Angel is the night lawyer. Once a week, she's the one who decides what the papers can and can't say.

During the day, she's a barrister. She struggles for justice in a system that's close to collapse, where she confronts the most dangerous aspects of humanity. Her life changes when a wealthy Russian offers her the biggest case of her career, a rape trial with a seemingly innocent client. But is someone manipulating Sophie from the shadows or is the danger much closer to home?

With her marriage under strain and haunted by nightmares from the past, Sophie must find the answer to these questions before it's too late.

This is a story about betrayal, trust, guilt and innocence, played out from the courtrooms of London to the darkest corners of Soviet era Moscow.


If you're like me and you love a courtroom drama then The Night Lawyer is most definitely for you.  There's nothing better than being immersed in a good story and feeling like you're viewing the trial from all angles and Alex Churchill does this absolutely brilliantly in her outstanding debut novel.  The Night Lawyer ticks all the boxes for a thrilling courtroom drama and then ticks a few more boxes for luck.

Alex Churchill is on to a winner here as Sophie Angel is a superb character with more strands to her story than a plate of spaghetti.  The daughter of a Russian father and English mother, Sophie spent her early childhood in Moscow before her family defected to the west.  Sophie has nightmares about her childhood and there's something about her Uncle Kiril that her parents aren't telling her.  A big tick goes in the family secrets box.

Sophie is a barrister in the prestigious Inner Temple and married to popular QC Theo Frazer so her life should be the envy of all of her peers, however, the couple are struggling to make ends meet and there are rumours that Theo is having an affair.  Barrister by day and newspaper libel lawyer by night, Sophie has a lot on her plate without her personal problems.  Let's tick that box for a potentially cheating spouse and put an extra tick in the gossip box as Sophie hears whispers around court.

As the great comedian Frank Carson would say, 'There's more!'.  A case from the past comes back to haunt her when a prisoner escapes from custody and is rumoured to be obsessed with Sophie.  Sophie has to keep looking over her shoulder whilst also taking on a rape case at the request of the new newspaper owner's wife.  The court case that follows is absolutely sublime; I felt like I was judge, jury, defendant, victim, prosecutor and defence as well as viewing it all from the public gallery.  This is one of those books that you can't put down because you're 'in court'.  A huge tick for realistic courtroom scenes that keep the reader entertained.

Aside from the magnificent story, it was great to get an insight into the workings and history of the British justice system.  Although I already knew about the history behind the black robes, I did look up the gateway at the top of Inner Temple Lane and Fleet Street.  I was amazed to read that the gateway is one of only a few surviving medieval buildings in London and that the rooms above it date back to the 17th Century when they were reputed to be used as council chambers of Charles I when he was Prince of Wales.  I love books where I get a little something extra from them; little nuggets of interesting facts that send me off searching the internet for hours.  That's the exceptional box populated with a big fat tick.

The Night Lawyer is a stunning debut that transports the reader from the present day courtroom in London one minute to Sophie's early childhood in Soviet Moscow the next.  It says on the back cover that this is a Sophie Angel novel so I am crossing my fingers and toes that there are many more Sophie Angel novels to come.  The Night Lawyer is absolutely outstanding and is a very highly recommended read.