The Secrets of Sunshine - Phaedra Patrick 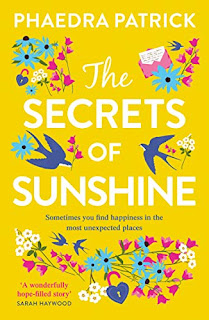 A single father gets an unexpected second chance at love in the heart-warming new novel from the bestselling author of The Library of Lost and Found.

Only his daughter Poppy knows that behind his prickly exterior, Mitchell Fisher is deeply lonely. He may have sworn off romance, relishing his job cutting off the padlocks that couples fasten to his hometown’s famous ‘love story’ bridge… but underneath it all, he’s still grieving the loss of Poppy’s mum.

Then one hot summer’s day, everything changes when Mitchell bravely rescues a woman who falls from the bridge into the river. He’s surprised to feel an unexpected connection to her, but then she disappears. Desperate to find the mysterious woman, Mitchell teams up with her spirited sister Liza to see if she’s left any clues behind. There’s just one – a secret message on the padlock she left on love story bridge…

Brimming with Phaedra Patrick’s signature charm and a sparkling cast of characters, The Secrets of Sunshine follows one man’s journey to unlock his heart and discover new beginnings in the unlikeliest places.


You can't cross a bridge these days without seeing love locks attached and as romantic as they are, the combined weight of all of this additional metal seriously weakens the bridge structure.  In The Secrets of Sunshine, Phaedra Patrick reminds us that each padlock has a story but you don't need to damage local landmarks to tell your love story.

It is main character Mitchell's job to remove the padlocks from the bridge in his town and he sees each and every single lock as an act of vandalism.  Mitchell has lost the love of his life and is filled with grief, regret, guilt and anger except when it comes to his daughter, Poppy.  Poppy is Mitchell's whole world and the relationship they have is so heartwarming.  After rescuing a woman who fell from the bridge into the river, Mitchell is devastated to wake up in hospital and be late to collect Poppy from school.  Hailed as a local hero, people start writing to Mitchell sharing their own stories of what the bridge means to them but the only story Mitchell is interested in is that of the nameless woman he rescued.

As we often find, it is a small world and through Poppy's music teacher, Liza, Mitchell finds a link to the woman on the bridge.  Liza has also been searching for the same woman and they double their chances of finding her by working together.  With Liza's influence and the letters he receives, the wall that Mitchell has built around his heart starts to crack.  He must let go of his guilt in order to start to living again.

It was very sobering to read Mitchell's story when his partner, Anita, was alive.  As an architect in a firm with the contract to build a new bridge, Mitchell spends more time at work than at home.  He missed out on so much of Poppy's life and constantly let Anita down but Poppy reminds us that his being home on the day of Anita's accident could have been more devastating.  We often think: 'If only I'd been there' when something bad happens but I certainly have never thought of it in quite the way that Poppy did.  What we think of as a cruel twist of fate, could perhaps have been so much worse.

I love receiving physical letters, which of course I rarely do these days, so I loved this part of the story.  Not only Mitchell's habit of letter writing but the way that strangers poured out their hearts to him through putting down their words on paper.  Phaedra Patrick has reminded me that there is something so very special about a hand written letter and we should never miss the chance to write one.

The Secrets of Sunshine is a warm and uplifting story; it's charming and heartwarming.  At first, I wasn't really sure what the book title had to do with the story but when I finished reading I was left with a warm and happy glow; it was as if sunshine had seeped out of the pages of the book and warmed my skin.  It's the perfect feel-good book for summer.